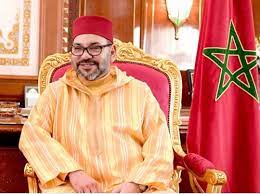 King Mohammed VI has congratulated the members of the Moroccan national team for their historic qualification to the quarterfinals of the 2022 FIFA World Cup in Qatar.

Immediately after the end of the match which opposed, on Tuesday, the Morocco soccer team to its Spanish counterpart, the sovereign spoke on the phone with the President of the Royal Moroccan Football Federation, Fouzi Lekjaa, and the coach of the national team, Walid Regragui, to whom the Sovereign expressed his sincere congratulations to the players and to the technical and administrative staffs who gave the best of themselves and achieved an excellent performance during this major sporting competition.

The King hailed the historic performance of the members of the national team who have lived up to the expectations and aspirations of the large and valiant Moroccan public that supports them in Morocco, Qatar and around the world, calling on them to stay the course in this competition, to continue to honor the national soccer and to carry high the flag of the Kingdom.

Several Heads of State have congratulated King Mohammed VI for this great performance.

They all expressed in these calls their warm congratulations to the King following this historic achievement.

The Emir of Qatar, Sheikh Tamim Ben Hamad al-Thani, celebrates with Moroccan fans the victories of the Atlas Lions. Le360 immortalized this beautiful moment of communion.

In addition to the thousands of Moroccans who fill the stands of Qatari stadiums each time the national team plays, Walid Regragui’s men can count on significant support: that of Sheikh Tamim Ben Hamad al-Thani, the Emir of Qatar.

Against Spain, as in Morocco’s three previous meetings in the World Cup, Sheikh Tamim celebrated the historic feat of Yassine Bounou’s teammates, who qualified for the first time in history for the quarter-finals of the planetaryhigh mass.

As some commentators put it, the first World Cup held in an Arab nation has produced the Arab world’s first quarterfinalist.

North Africa Post's news desk is composed of journalists and editors, who are constantly working to provide new and accurate stories to NAP readers.
NEWER POSTChad jails hundreds in mass trial over deadly protests
OLDER POSTMorocco knock out Spain on penalties in an historic match, cruises to World Cup Quaterfinals