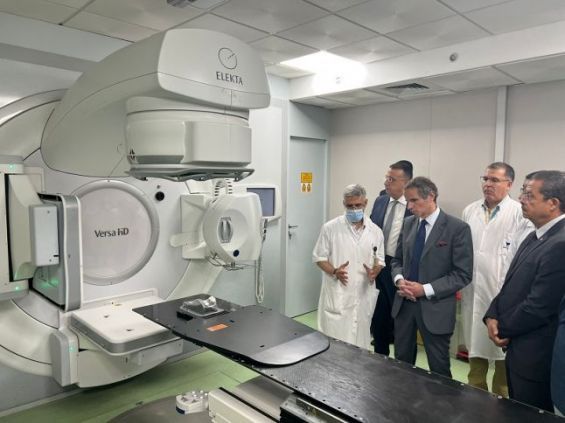 Cooperation prospects between Morocco and the International Atomic Energy Agency were at the center of talks held Monday in Rabat between visiting IAEA Director Rafael Mariano Grossi and Moroccan minister of Energy Transition and Sustainable Development, Leila Benali.

“Morocco’s expertise in nuclear science is a valuable asset for the country’s development”, said Mr. Grossi, noting that the exchange focused on the Moroccan economy, the prospects for nuclear energy and Small Modular Reactors (SMRs).

Being smaller can make it easier to find sites and integrate into a grid with intermittent renewable energies. According to experts, modular reactors could more than halve the cost and build time associated with traditional ones.

Earlier this month, Mrs. Benali said Morocco mulls building nuclear power plants within the frame of its energy mix and efforts to speed up transition to low-carbon economy.

On Monday, the IAEA and Moroccan Health ministry signed a cooperation accord that will help expand radiotherapy in Africa and fight zoonotic diseases, caused by bacteria, parasites, fungi or viruses that originate in animals and can be transmitted to humans.

The IAEA chief has praised Morocco’s progress made in early cancer diagnosis and targeted treatment, hailing the Kingdom’s regional solidarity and support to IAEA initiatives launched to combat cancer and improve access to nuclear medicine therapy across the Continent.

Morocco is “a key ally of the IAEA in promoting nuclear science in Africa”. “This partnership has just been strengthened through an agreement that will help Africa provide cancer care for all with ‘Rayons d’Espoir’ and fight zoonoses with ‘ZODIAC'”, he wrote on his Twitter account.