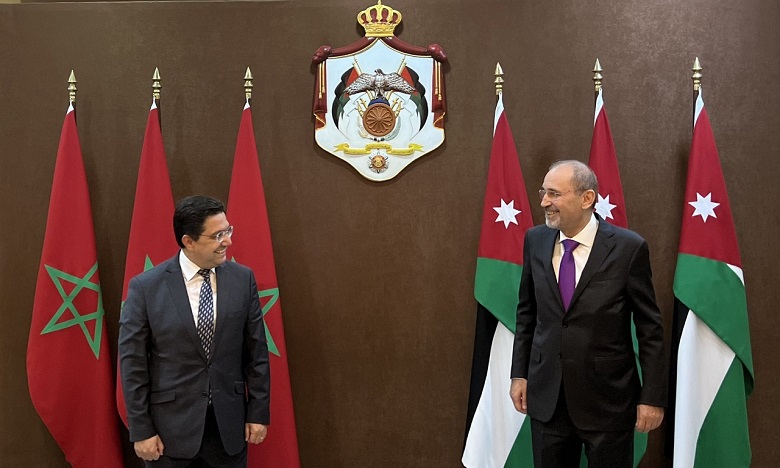 At a press briefing Monday in Amman after talks he held with his Moroccan peer Nasser Bourita, Safadi reaffirmed Jordan’s constant position of support to the territorial integrity of Morocco and the need to settle the issue of the Moroccan Sahara on the basis of the autonomy initiative, and in a way that guarantees and preserves the territorial integrity of Morocco and the sovereignty of the Kingdom over all its territory.

He also said that Jordan is proud of the strategic and historical relations between the two kingdoms, which are working to develop these ties in various areas in accordance with the directives of the leaders of both countries.

During the meeting, the two officials discussed ways to activate cooperation in various fields and expand the areas of cooperation, in accordance with the declaration issued after the meeting of King Mohammed VI and King Abdullah II in Casablanca in 2019, and decided to start preparations for holding, in Amman as soon as possible, the Joint High Commission that had convened in Morocco in 2016.

On the sidelines of the joint commission, a forum of Moroccan and Jordanian businessmen will be held to prospect investment opportunities in the two countries as well as in other regions including the African continent.

It was also agreed during the meeting to facilitate the movement of citizens between the two Kingdoms through facilitating the granting of visas and solving the issue of air and sea transport, since it is considered essential to strengthen cooperation and trade between the two countries.

Regarding the Palestinian issue, the two sides agree that this is a central issue and that the only solution to achieve a just and comprehensive peace will be through the two-state solution that embodies the independent and sovereign Palestinian state with occupied Al-Quds as its capital within the borders of June 4, 1967, living in security and peace alongside Israel.

They discussed the efforts that need to be continued to resume serious and effective negotiations that will lead to progress towards a just peace on the basis of the two-state solution.

Bourita reiterated Morocco’s support to Jordan’s central role in the Palestinian cause and the role of King Abdullah II regarding the guardianship of the Islamic Holy Places in the city of Al-Quds.

He made it clear that King Mohammed VI supports this role and calls for coordination with Jordan in everything that concerns the Palestinian cause and the Waqfs and Islamic Places in the Holy City of Al-Quds.

He added that the two countries are working together to support the Al Quds inhabitants and also preserve the Arab and Islamic identity of the holy city.

Regarding the Sahara issue, Bourita expressed Morocco’s appreciation of the constant position of the Hashemite Sovereign and Jordan regarding the territorial integrity of the Kingdom, highlighting that the decision of King Abdullah II to open a consulate general in Laayoune is a strong signal of this support, which is highly appreciated by the Moroccan King, government and people.