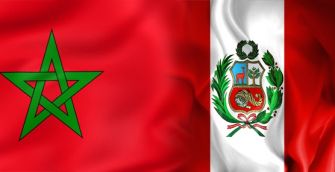 The Republic of Peru decided Thursday to withdraw its recognition of the so-called “SADR” and voiced its firm support to the autonomy plan offered by Morocco for a lasting resolution of the Sahara regional conflict.

The move deals another blow to the Polisario separatists and their Algerian supporters. It comes following a telephone conversation held between Peru’s Foreign minister Miguel Angel Rodriguez Mackay and Moroccan peer Nasser Bourita.

A press release issued by Peruvian ministry of Foreign Affairs says the country’s sovereign decision is in line with international law and UN Charter. It respects the principles of territorial integrity of UN member states and supports of the efforts of UN Secretary-General and the UN Security Council to “achieve a lasting political and realistic solution” to the Sahara issue.

“The Government of Peru, which takes into accounts the international law and UN resolutions on the Sahara, respects the territorial integrity of the Kingdom of Morocco and its national sovereignty”, says the Peruvian Foreign ministry statement.

The statement continued that “taking into account that there is no effective bilateral relationship to date, the Government of the Republic of Peru decides to withdraw its recognition” of the ‘SADR’ and “break all relations with this entity.” “This decision will be notified to the United Nations,” the statement said.

“In accordance with international law and UN resolutions on the Sahara issue, the Government of the Republic of Peru appreciates and expresses its respect for the territorial integrity of the Kingdom of Morocco and its national sovereignty, as well as the autonomy plan relating to this regional dispute,” it added.

“The two governments agreed to strengthen their bilateral relations through the immediate signing of a multi-sectoral roadmap that includes periodic political consultations, effective cooperation in the economic, commercial, educational, energy, agricultural and fertilizer fields,” the Peruvian Foreign Ministry said.

In response to this announcement, the Moroccan Foreign Ministry released a statement saying that Morocco welcomes Peru’s decision to withdraw its recognition of the so-called “sadr” – taken a year ago- and to support the Kingdom’s territorial integrity and its autonomy initiative.

This decision opens a new page in relations with this friendly country and will allow to deepen political dialogue and strengthen sectoral cooperation, especially in the areas of agriculture and fertilizers, the Moroccan Foreign Ministry said, vowing that concrete actions will be carried out very quickly to this end.

Thanks to the actions carried out in recent years, many countries have withdrawn their recognition of the puppet entity.