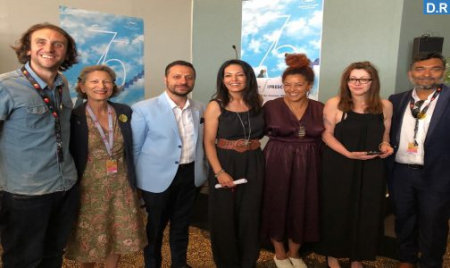 The International Federation of Film Critics (Fipresci) on Saturday awarded the feature film ‘The Blue Caftan’ by Maryam Touzani the prize for the best film in “Un Certain Regard” selection, a few hours before this year’s Cannes Palme d’Or prize announcement.

This is the first time that Morocco wins this international award in Cannes.

Projected last Thursday in a world premiere in Cannes in the official selection of “Un Certain Regard” alongside 18 other films from around the world, “the Blue Caftan” received a standing ovation after the screening of the movie.

Produced by Nabil Ayouch and Amine Benjelloun, “The Blue Caftan” is a movie about traditions and love.

The film relates the story of Halim and Mina, a couple who run a Caftan store in the Medina of Salé, joined by Youssef, a young apprentice who shares with his Maalem (master teacher) Halim the same sincere passion for sewing.