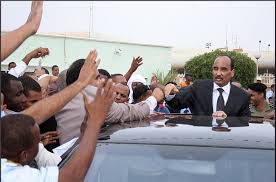 Mauritania will hold presidential elections in June and President Mohamed Ould Abdel Aziz is the first person to hand in his documents as a candidate to the Constitutional court. The elections could be boycotted as it has been for the case of the municipal and legislative elections. Alongside the preparations for the elections, he is also busy strengthening bilateral relations.
Lieutenant-General Mohamed Ould Cheikh Mohemd Ahmed, Chief of Mauritania’s National Army Staff, handed a letter to General Sheikh Mohamed bin Zayed Al Nahyan, Crown Prince of Abu Dhabi and Deputy Supreme Commander of the UAE Armed Forces on behalf of his President. The Lieutenant-General’s visit is part of efforts to develop the bilateral ties that exist between the two countries.
The visit will serve as a window for wider joint cooperation and coordination in diverse projects especially in the aspects of military and defense. Crown Prince General Sheikh Mohamed bin Zayed Al Nahyan was pleased to receive his Mauritanian counterparts and hopes that their ties will continue to be strengthened and be centered on mutual interests.
President Mohamed Ould Abdel Aziz couldn’t make the visit because he is busy preparing for the presidential elections which is less than two months away. He is considered as the favorite candidate.
Most of the opposition parties have queried the transparency of the elections and therefore decided to boycott it. Ten opposition parties, including the main Rally of Democratic Forces (RFD) party led by Ahmed Ould Daddah have already boycotted the legislative elections in December.
However, anti-slavery activist Biram Ould Abeid is the only candidate ready to contest in the polls as an independent candidate although he is yet to register. Potential candidates have until May 8 to declare their intention to stand.