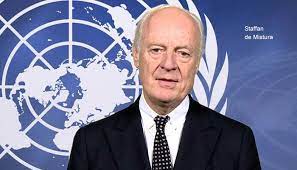 The United States supports the efforts of the new personal envoy of the UN Secretary General for the Sahara Staffan de Mistura, that it described as “one of the most experienced diplomats in the world”, to find a political solution to the dispute over the Sahara.

The statement was made by a senior official in the US administration on Friday at a background press call on the achievements of the Biden administration in the Middle East before year’s end.

“On Morocco and Algeria and the conflict in Western Sahara: We now have a U.N. Envoy, Staffan de Mistura, one of the world’s most experienced diplomats,” the senior US official said.

“We worked with closely with the parties and with the Moroccans to ensure Staffan was appointed to that post. And he is now hard at work, which we think is quite important for keeping that conflict in check and trying to find a political resolution,” he added.

It is worth noting that the senior official mentioned Morocco and Algeria as the parties to the Sahara, without any allusion to the puppet Polisario.

In this Broad Middle East regional year-end discussion, the senior US official also touched on the Abraham Accords, under which four Arab countries have established relations with Israel, namely the UAE, Bahrain, Morocco, and Sudan.

He said since the beginning, when the UAE announced its Abraham Accord with Israel, while President Biden was a presidential candidate, he issued a statement right away, noting the importance of that event and expressing his support for those new connections across the region.

“And we’ve worked to strengthen the existing Abraham Accords, and we are working quietly but quite assiduously to expand the Abraham Accords. And so, these things take some time, but they’re very much a focus of ours,” he added.

North Africa Post's news desk is composed of journalists and editors, who are constantly working to provide new and accurate stories to NAP readers.
NEWER POSTEgypt in talks with three Chinese companies to launch production of electric cars in 2023
OLDER POSTGCC gives Algeria cold shower ahead of Arab Summit