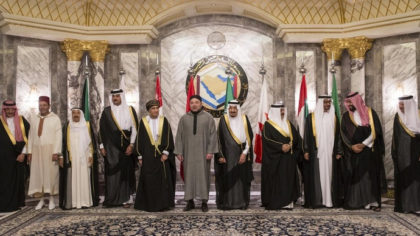 Countries of the Gulf Cooperation Council have sent a strong blow to Algeria’s attempt to make of the next Arab Summit it plans to host an anti-Moroccan event.

In unequivocal terms, the GCC reiterated support to Morocco’s sovereignty over the Sahara, to the latest UN Security Council resolution which calls for a mutually acceptable solution and lauds Morocco’s autonomy initiative.

Algeria has shown vehemence before the adoption of the resolution and agitation afterwards as it reaps but resounding diplomatic defeat in the face of an unstoppable global momentum in support of Morocco’s historic rights in the Sahara.

The GCC, mustering Bahrain, Kuwait, Qatar, Oman, Saudi Arabia, and the UAE, has also shown that Algiers’s attempts to gear the summit to denounce diplomatic normalization with Israel and defend its Polisario proxies is a mere chimera that no one in the Arab league adheres to.

Algerian President and his foreign minister are already using the conditional when speaking about the Arab summit using terms such as “if the summit is going to be held in Algiers.”

Algeria has chosen its camp in support of Iran and blood-thirsty regime in Syria further distancing itself from any Arab consensus.

As its voice becomes increasingly inaudible in Africa, Algeria represents all that has impeded Arab integration. Algiers is now viewed within the Arab region as a warmongering military-dominated state on the verge of economic collapse and social implosion.

As it seeks virtual gains, Morocco reinforces its position on the ground with over 25 countries giving a concrete dimension to Morocco’s sovereignty in the Sahara by opening consulates in Laayoune and Dakhla.

Bahrain, UAE and Jordan to mention but a few in the Arab World have opened consulates in the Sahara which was recognized as a Moroccan territory by the US in late 2020.