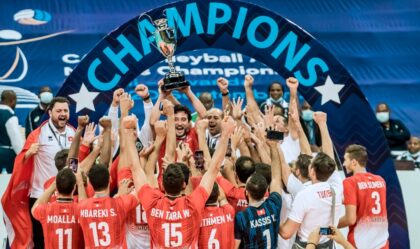 Tunisia Tuesday bolstered its domination of the African volleyball sports as it clinched for the 11th time the title of African Men’s Volleyball Championship after beating rival Cameroon.

The Tunisian men team defeated the Cameroonian squad by 3 sets to 1 in the final game at Kigali Arena.

The North African giants started off on a slow note, losing the first set 25-16 to the Cameroonians but they bounced back to win the next two sets 25-21-a-piece and the 4th set 25-16 to be crowned African champions for a record 11th time.

The Carthage Eagles cruised through the second and third sets by 25-21. The team headed on in the fourth set to confirm their domination of the Cameroonian team.

The Tuesday victory is the third in a row for Tunisia which also beat Indomitable Lions in the previous final. Egypt are third on the men competition ranking. Host Rwanda are 6th while Tanzania is the worst ranked at the 16th spot.