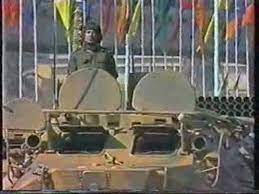 The Algerian army is planning to flex its military muscles during a large-scale parade it will conduct in the capital city on 1st Nov. 2021 with eye on Morocco.

This year’s show will be the first of its kind since the military parade organized in 1989 under the presidency of Colonel Chadli Benjedid.

The provocative move comes after Algiers cut diplomatic ties with Rabat, unfairly blamed by Algerian rulers for all their social, economic and political failures.

Military parades were abandoned for more than three decades in Algeria due to several reasons related to the internal situation of the country. However, the military hawks, de facto rulers, have decided to revive the event in a bid to reignite patriotic feelings among the population as their popularity have ebbed, hitting rock-bottom due to their catastrophic management and failure to address the country’s socio-economic problems.

Challenged by the popular Hirak movement since February 2019, the Algerian military junta needs a fictional enemy for its survival to divert the public attention from growing pressure exerted by the pro-democracy protestors who are demanding regime change, and the establishment of a civilian and democratic state.

Taken by surprise by the US recognition of Morocco’s full sovereignty over its entire Saharan Provinces and irked by intervention of the Royal Armed Forces in Guerguarat to end to obstruction by the Polisario militias of the civilian and commercial traffic with Mauritania, the Algerian regime is moving towards military escalation with its neighbor.

Unfortunately, this irresponsible path will only undermine further the fragile security situation in the region, especially in the Sahel where terrorist groups with links to the Polisario are expanding their presence threating stability of the whole region.

If Algerian Generals think that Morocco will change course or will be intimidated by such a military parade, they are deadly wrong!