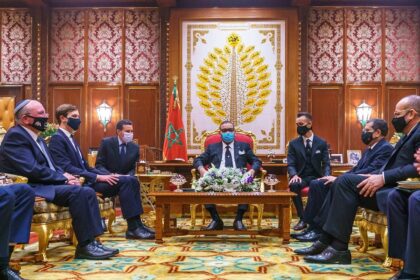 The UK government has reaffirmed its strong support to the normalization of relations between Israel, Morocco, Bahrain, the United Arab Emirates, and Sudan within the frame of the Abraham accords.

“These are historic steps which see the normalization of relations between friends of the UK”, Britain’s state minister for the MENA region James Cleverly said at the House of Commons.

In his response to a question by Labor MP Diana R. Johnson on UK’s actions to promote further diplomatic normalization between Israel and Arab nations, the minister said his country welcomes the Abraham accords, which seek to strengthen peace in the Middle East and around the world.

“We also want to see greater coordination and cooperation between Israelis and Palestinians, particularly on economic initiatives, to help improve the day to day lives of Palestinians under occupation, and build increased dialogue”, underlined the minister.

Israel, the UAE and Bahrain signed the Abraham Accords at the White House in September of last year. The following month, Israel and Sudan normalized their relations. Morocco subsequently signed the US-brokered accords in a tripartite Israel-Morocco-US declaration in December 2020.

According to US press reports, Secretary of State Tony Blinken will hold a virtual meeting on Friday Sept.17 with his peers from Israel, Morocco, the UAE and Bahrain to mark the first anniversary of normalization agreements between the three Arab countries and Israel.

The event will be the Biden administration’s highest-profile display of support to the Abraham Accords sealed by former President Donald Trump.

The event will also enable delegates from UAE, Morocco, and Bahrain to discuss furthering ties with Israel.

On Monday, the ambassadors to the UN from Morocco, the USA, the UAE, Bahrain and Israel attended a ceremony held at the Museum of Jewish Heritage in New York to mark the 1st anniversary of the Abraham accords.