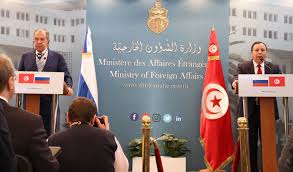 Tunisia Saturday said it would welcome Syria’s reinstatement in the Arab League as Russia lobbies for the move, but made it clear that the decision is “by no means Tunisian but rather a common Arab decision.”

Syria is an Arab state, and its natural place is within the Arab League…However, the question does not depend on Tunisia but on the Arab League, said foreign minister Khemaies Jhinaoui at a joint news conference in Tunis with his Russian counterpart Sergei Lavrov.

Arab Foreign Ministers will convene and decide on how to proceed as well as on the date and the status of Syria, he said.

“Tunisia is keen to see Syria get out of the crisis, guarantee its stability and national unity and safeguard the State,” the Tunisian official said.

Several Arab countries including Saudi Arabia, the UAE, Qatar and Jordan had backed up rebels opposed to the Assad regime but since the embattled President turned the tide thanks to Russia’s intervention four year ago, Damascus is gradually coming back into the international community.

The UAE, Bahrain and Jordan have reconciled with Syria. Several other countries are expected to follow suit should the Pan-Arab organization greenlight the move. Qatar has however announced it will not change its policy towards Bashar.

Tunisia will host the Arab summit in March and Syria’s readmission could be put on the agenda.

Lavrov embarked on a North African regional tour to discuss bilateral cooperation but also to lobby for Syria’s reintegration within the Arab League.

“As we have discussed in Algeria and Morocco over the past few days, we would like Tunis to also support Syria’s return to the Arab family, the Arab League,” Lavrov said at the news conference.

Russia and Tunisia agreed to step up their counterterrorism cooperation and an impetus will be given to this cooperation under the umbrella of the United Nations, he added.

Lavrov said the talks he had with his Tunisian counterpart offered the opportunity to address several issues, including the situation in Libya “where terrorist threats persist.”