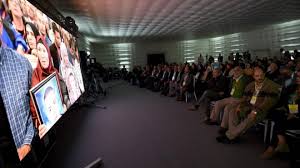 Tunisian TV to Air Grievances of Victims of Authoritarian Rule

In a move to ease tension and encourage reconciliation, Tunisia’s Truth and Dignity Commission will air testimonies of the victims of authoritarian rule on TV.

The Commission investigates past human rights violations over a 50-year period. It has received so far the testimonies of about 11,000 people. More than 62,000 incidents, including torture and rape, have been filed to the commission since 2013.

The public hearings were lauded by international and local rights organizations. London-based human rights charity Amnesty International has welcomed the initiative, saying victims “may finally have a chance to have their right to truth fulfilled”.

The commission explains that the goal from broadcasting the testimonies is not revenge but rather to help establish reconciliation and promote the country’s democratization efforts after the Arab Spring by stressing a breaking away with the authoritarian model.

Further public hearings will be held on 17 December and 14 January, dates that commemorate the outbreak of Tunisia’s 2011 uprising and the flight of Ben Ali to Saudi Arabia.

The December session will also feature landmark testimonies of officials accused of human rights violations, torture or corruption who will present public apologies.

Morocco was the first Arab country to establish, in 2004, a similar truth finding commission, called Equity and Reconciliation commission. The commission investigated past human rights violations committed during the reign of the late King Hassan II. It aired testimonies of victims of oppression on radio and TV and extended them financial compensations.

North Africa Post's news desk is composed of journalists and editors, who are constantly working to provide new and accurate stories to NAP readers.
NEWER POSTTangier-Lagos Highway, a Linchpin for Economic Integration in West Africa
OLDER POSTUS Representative to NATO Calls for Fostering Ties with Morocco