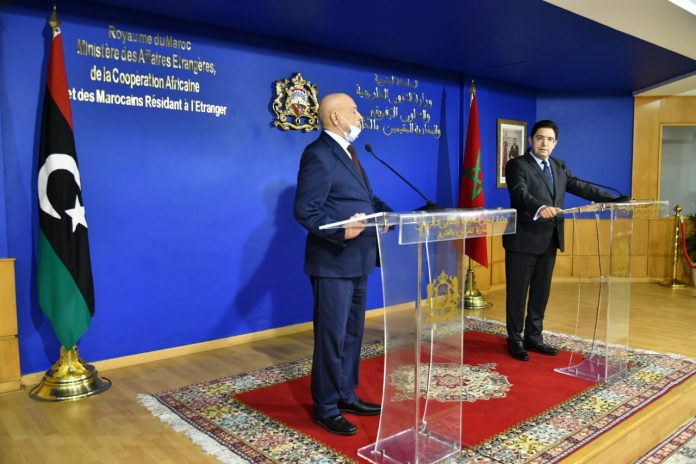 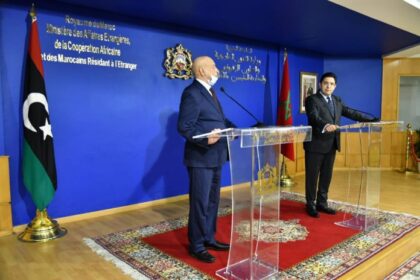 Morocco plays a central role in the process of resolving the Libyan crisis, said speaker of the Libyan House of Representatives Aguila Saleh, underlining that “the Kingdom supports us daily and is in constant contact with us to achieve this goal.”

Aguila Saleh visited Morocco Thursday for the second time in less than a month, after his participation in the Berlin conference held Wednesday. The trip is highly symbolic and underlines the role played by Morocco in the resolution of the Libyan conflict.

The speaker of the Libyan House of Representatives who came to consult Morocco, after his participation in the Berlin meeting, welcomed, at a press briefing after talks with Moroccan Foreign Minister, the major role played by Morocco in the Libyan issue and praised the historic positions of the Kingdom and its support for the achievement of the will of the Libyan people for the holding of presidential and legislative elections.

He highlighted Morocco’s efforts since 2015 to mediate without interfering in order to reach a political solution in the country, adding “We are aware of Morocco’s influence and its regional, Arab and international roles.”

Saleh also stressed the need to hold these elections on their scheduled date (December 24), under the supervision of the international community, while ensuring that these polls are honest. All measures have been taken in anticipation of these elections, he said.

“There is no solution to the Libyan crisis other than holding fair parliamentary and presidential elections that will result in institutions that have the support of all Libyans and will work for reconciliation and unification of state institutions,” he stressed.

“We rely heavily on the role and support of Morocco to hold these elections on their scheduled date and allow the Libyan people to choose their representatives with transparency and honesty,” Saleh added.

The Foreign Minister Nasser Bourita on his part pointed out that Morocco, in accordance with the instructions of King Mohammed VI, will always stand by the legitimate Libyan institutions and support international efforts to resolve the crisis that this Maghreb country is going through, within the framework of what has been agreed upon between the various Libyan parties, including the holding of elections on their scheduled date.

“Morocco considers that the organization of elections should be the main objective of the next stage in Libya,” said Bourita who emphasized the need for the involvement of all Libyan institutions in the preparations for these elections so that they can take place in the best conditions.

Morocco, he added, is in permanent contact with all Libyan institutions, including the House of Representatives as a key institution in the process of preparing the legislative and presidential elections, which will allow Libyans to elect the institutions that represent them.

Libyan stability hinges on December elections, he insisted, pointing out that only Libyans can achieve between themselves a political solution through these elections.
Bourita reiterated Morocco’s position in support of an inter-Libyan political solution to the crisis in the Maghreban country and added that international conferences including Berlin meetings were of no help.

“There is no Berlin solution to a North African problem. North Africa has its own context and has its own dynamics. Morocco knows these dynamics and that is why its contribution is first and foremost that of supporting the Libyans,” he said.

“The solution to the Libyan conflict is not to be found in Berlin,” and “Morocco’s role did not start with Berlin and will not end with Berlin,” he said after Morocco rejected to attend the second Berlin conference on the war-torn north African country.

Morocco had not been invited to the Berlin 1 conference, an approach it deemed wrong, but received an invitation letter to Berlin 2, jointly signed by the German Foreign Minister and the UN Secretary General. However, the Kingdom did not make the trip to Germany, despite the insistence of the Libyans.

Morocco has been at loggerheads with Germany over its position on the Sahara issue and its disregard by excluding Rabat from the first Berlin conference.

Morocco has played a key role in mediating between the Libyan parties for a political solution and considers the Skhirate agreement as a basis that can be updated to help achieve lasting peace in the country.
“Morocco believes that the solution will come from the Libyan people rather than a foreign party,” said Bourita.