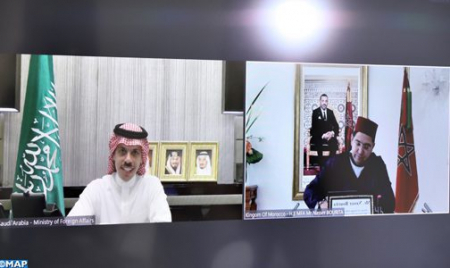 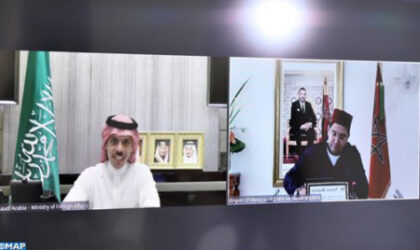 Saudi Arabia has reiterated its constant and principled position regarding Morocco’s territorial integrity, and its continued support for the Moroccanness of the Sahara.

This came during a videoconference held Tuesday between the Moroccan and Saudi Foreign Ministers, Nasser Bourita and Prince Faisal bin Farhan Al-Saud.

During the talks, the Saudi official renewed his country’s confidence that any solution to the Sahara artificial regional conflict can only occur within the framework of the sovereignty and territorial integrity of Morocco, said the Moroccan Foreign Ministry in a statement.

Bourita, for his part, reiterated Morocco’s absolute solidarity and continued support to sisterly Saudi Arabia to defend its stability, territorial integrity, and security of its citizens and residents, as well as its initiative to resolve the crisis in Yemen, the statement added.

The two officials, who also discussed a number of Arab and regional issues of common interest, including the situation in Yemen and Libya, have affirmed the adherence of their respective countries to respect for the sovereignty and territorial integrity of States and the promotion of peaceful solutions to Arab causes, while ending foreign interference in the affairs of Arab States.

Regarding the Palestinian cause, the two ministers expressed their constant solidarity with the Palestinian people in defending their just cause and their legitimate rights and emphasized the need not to undermine the multi-religious character of the city of Al-Quds and to preserve its legal status.

They stressed the need to intensify efforts to bring the peace process out of the deadlock and to relaunch negotiations between the Palestinians and Israelis on the basis of the two-state solution agreed upon by the international community.

In this connection, the Saudi Foreign Minister commended the efforts made by King Mohammed VI, Chairman of the Al-Quds Committee, to defend the Holy City of Al-Quds and support its people, and the Bayt Mal Al-Quds Agency.

Talks also covered the strong partnership and cooperation binding the two countries and preparations for the next session of the joint Commission.