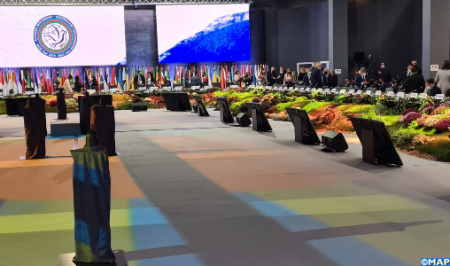 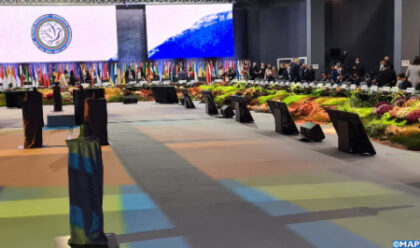 Morocco is taking part, along delegations of over 100 countries, in a high-level commemorative meeting to mark the 60th anniversary of the first conference of Non-Aligned Countries, which opened Monday in Belgrade.

The conference, co-hosted by Serbia and Azerbaijan, is “an important opportunity for the Non-Aligned Movement to discuss its historic contribution, to reaffirm its commitment to the fundamental principles of the UN Charter, its support for a world order based on multilateralism, as well as to define new objectives for the future”, the organizers said in a press release.

The delegation representing Morocco, one of the founding members of the Non-Aligned Movement in 1961, is led by the Kingdom’s Permanent Representative to the United Nations, Omar Hilale.

During debates, Omar Hilale reacted to the provocative remarks of the Algerian Prime Minister regarding the Moroccan sahara, underlining that Algeria is “the real party responsible for the creation and maintenance of the artificial regional dispute over the Moroccan Sahara issue and is called upon to fully engage in the roundtables process in a spirit of realism and compromise.”

“The participation of Algeria in the political process as the real party responsible for the creation and maintenance of this regional dispute is the only way to reach the sought political solution,” said the Moroccan diplomat.

Algeria is thus “called upon to assume its full historical responsibility and to abandon obsolete and buried options, and to fully engage in the roundtable process in a spirit of realism and consensus,” insisted Omar Hilale.

After noting that the prevention of conflicts and the peaceful settlement of disputes remain the cornerstone of the Non-Aligned Movement to face the challenges of international peace and security, he stressed that “Morocco, on the basis of this principle, has always worked for a peaceful settlement of the artificial regional dispute over the Moroccan Sahara, under the exclusive auspices of the United Nations and with full respect for its territorial integrity and within the framework of its national sovereignty.”

In this regard, he recalled that the resolutions of the Security Council gave an impetus to the political roundtables process with a view to achieving a realistic, pragmatic, lasting political solution, based on compromise, to this artificial conflict. “The autonomy initiative within the framework of the sovereignty and territorial integrity of Morocco remains the only possible solution to this dispute,” he noted.

In addition, the diplomat deplored “the catastrophic humanitarian situation prevailing in the Tindouf camps, where Algeria abandoned its international responsibilities towards this population to an armed separatist group, in flagrant violation of the rules of international humanitarian law”.

In this regard, he called on the international community to act to oblige the host country, Algeria, to allow the High Commissioner for Refugees to hold a census of the population in the Tindouf camps and to put an end to the systematic diversion of humanitarian aid intended for these populations held against their will in these camps for more than 45 years, and which suffer on a daily basis from the worst violations of their fundamental rights”.

The first Conference of Non-aligned Countries, held in Belgrade in September 1961 in the midst of the cold war, brought together the heads of state and government of 25 countries, including Morocco, in addition to three observer members and delegates of several liberation movements, parties, and organizations.

They met in Belgrade to found the Movement, whose fundamental principles still serve as guidelines for all states and nations committed to peaceful coexistence, equality, solidarity, non-interference in internal affairs of countries and respect for their territorial integrity and sovereignty.