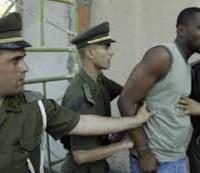 The President of the African Union Commission, South Africa’s Nkosazana Dlamini-Zuma, came under harsh criticism for her deafening silence on the violations of human rights and the 1951 Geneva convention by Algerian authorities which have recently deported thousands of Sub-Saharan migrants.

Officials from Mali, Senegal and Côte d’Ivoire have all condemned the silence of the AU official in the face of the abhorrent racist treatment of Algerian authorities who have arrested Sub-Saharan migrants before transporting and abandoning them in the desert in northern Niger.

By turning a blind eye on the summary deportations by Algeria and the calls of national and international NGOs for a halt of these mass expulsions of people in need of international protection, Zuma, in connivance with Algeria, shows that her personal biases and political alliances take precedence over humanitarian considerations thus adding yet another moral fiasco to her mandate.

Her tenure at the AU was an utter fiasco. She willfully led the AU to the abyss due to a lack of vision. When she took office, Africa was struggling with multiple security, environmental and health challenges. Her input to resolving the political crises that erupted during her term, whether in South Sudan, Burkina Faso, Libya or recently in Burundi, was so insignificant and reflective of a lack of knowledge about Africa.
The same thing can be said about her poor handling of the Ebola crisis and the migration crisis. It took her eight months and the tragic death of 2800 persons to organize the first emergency meeting of the AU.
Zuma has also been criticized for her poor achievement at the African Union as she was more focused on using her position at the African Union to gaining political support at home rather than to addressing Africa’s pressing issues.

North Africa Post's news desk is composed of journalists and editors, who are constantly working to provide new and accurate stories to NAP readers.
NEWER POSTLibya: Sirte is ISIS-Free but Terrorism War Unfinished, PM Serraj
OLDER POSTConcern in the EU over Instability Prospects in Algeria