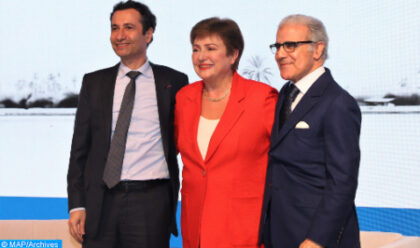 The Managing Director of the International Monetary Fund (IMF), Kristalina Georgieva, has congratulated Morocco for the progress made in COVID-19 vaccination, as well as for its anticipatory strategy aimed at mitigating the effects of the health crisis and ensuring economic recovery.

At a virtual meeting held on Friday with Minister of Economy & Finance Mohamed Benchaaboun, and Governor of Bank Al-Maghrib (Morocco’s central bank) Abdellatif Jouahri, Georgieva underlined the commitment of the IMF and the international financial community to supporting developing countries in their efforts to accelerate economic recovery and strengthen resilience to future shocks, the Economy & Finance Ministry said in a statement.

During the Friday meeting, decided on the sidelines of the IMF- World Bank spring meetings, which took place virtually April 9 -11, Georgieva called on the Kingdom to continue its reform programs and take advantage of new opportunities that arise in particular in the areas of climate and digitalization.

For his part, Benchaaboun highlighted the main response measures adopted by Morocco, in particular through the establishment of the Covid-19 Fund.

He also outlined the priority reform projects undertaken by Morocco, in accordance with the high instructions of King Mohammed VI, in particular the post-Covid recovery plan, the reform of the public sector and the program for the generalization of social protection.

The minister also praised the management of the IMF for the initiatives launched to mitigate the negative effects of the Covid-19 crisis. In this regard, he called on the IMF to launch initiatives dedicated to middle-income countries, including Morocco, in order to help them meet their specific needs in the context of the current crisis.

For his part, Jouahri commended the work accomplished by the IMF during this period of crisis and thanked the IMF for the technical and financial support provided to Morocco in particular through its Precautionary and Liquidity Line.

The Governor of the Central Bank also highlighted the Kingdom’s commitments and the progress made in other priority sectors including green finance, public-private partnerships, financial inclusion and digitization.

At the end of this meeting, the two parties reaffirmed their shared commitment to further strengthen relations of cooperation between Morocco and the IMF and to ensure the success of the annual meetings of the World Bank and the IMF, to be held in Marrakech in October 2022.