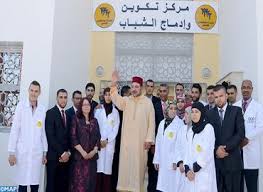 King Mohammed VI of Morocco stressed the need for a new strategy to promote youth employment by putting young people at the heart of the new development model.

In a speech on the occasion of the 65th anniversary of the Revolution of the King and the People, the Monarch called for an integrated youth strategy and asked that special consideration be given to finding the most effective means to improve young people’s circumstances.

He deplored that despite the overall economic growth one in four youths remain unemployed. “The figures are even more disturbing in urban areas.”

In this regards, the King reiterated the need for revamping the educational system, which has been producing unemployed people “especially in certain branches of study, where graduates – as everyone knows – find it extremely hard to access the job market.”

Such a waste of public resources, he said, hinders Morocco’s development and affects the living conditions of many Moroccans.

The King also called for addressing the issue of brain drain and called for offering attractive incentives as well as the appropriate inducements to encourage qualified people to settle in Morocco.

In light of the above, the king also stressed the need for a review of public mechanisms for youth employment and decided that a national meeting on employment and training should be convened before the end of the year. The meeting is meant to make practical decisions, devise new solutions, launch initiatives and chart a specific roadmap to improve the employment situation.

Equally, he called for giving priority to specialties, which create jobs, and to develop an effective means of giving students career guidance to help them choose between academic studies and vocational training, depending on their abilities and personal preference.

The Monarch stressed that a thorough review of vocational training programs is urgently needed “to align them with the needs of businesses and the public sector, and to make sure they are adapted to changes in industry and trades in general, thereby increasing the chances of graduates to access professional life”.

“Further attention therefore needs to be given to vocational training at all levels, and to creating a new generation of centers for the vocational training of young people, keeping in mind current needs as well as the particularities and expectations of each region,” he insisted.

The informal sector was also an area to which the King pointed out as necessitating integration in the formal economy “by providing proper, motivating training to people involved in the informal sector, as well as social security and assistance for self-employment and business creation.”

Calling the Government to give incentives to young people to set up small and medium-sized enterprises in their fields of competence, in addition to promoting self-employment and the creation of socially responsible businesses, the Monarch stressed the need for establishing a compulsory three-to-six month foreign language course at each training institution and include foreign language learning at all levels of education, especially in technical and scientific branches.

“We must give our young people what they need in the areas of education, employment, health and so on. More importantly, we must enhance their confidence and give them hope in the future,” said the King, underlining that he has always regarded young people as the country’s true wealth.