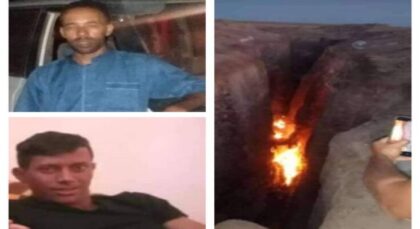 The Office of the United Nations High Commissioner for Human Rights (OHCHR) has severely criticized the Algerian regime for the assassination of two Saharawi gold miners, and denounced the “systematic violations” committed by Algerian security forces against the Sahrawis in the Tindouf camps.

The two men were immolated alive with gasoline by the Algerian army after it caught them digging for gold on October 19, 2020.

The special rapporteurs of the OHCHR addressed a correspondence to the Algerian government on January 7, 2021, underlining the essence of the accusations brought by the families of the victims against the Algerian authorities, and condemning these abuses which, they said, “seem to be part of a more general trend of systematic violations committed by the Algerian security forces.”

“Algeria must investigate the abuses and violations of human rights in the Tindouf camps, because the alleged abuses took place on Algerian territory and therefore fall under its territorial jurisdiction”, underlines the correspondence addressed to Algerian authorities following the complaint lodged by an NGO with the Special Rapporteur on extrajudicial, summary and arbitrary executions.

“The families of the Sahrawi refugees fear reprisals due to the excessive use of force by the Algerian security forces”, further underlines the OHCHR document.

Algeria has forsaken thousands of Sahraouis in inhuman living conditions in the Tindouf camps, a situation that was denounced again before the 46th session of the UN Human Rights Council.

The immolation case brought up before the Human Rights Council highlighted the summary executions and human rights violations suffered by thousands of Sahraouis in the Tindouf camps.

The UN Human Rights Council session was marked by a series of calls by several rights activists who denounced the surge in rights breaches by the Polisario against civilians in the camps in connivance with Algeria.

The Algerian army has on multiple occasion fired at anyone who leaves the camps, and the Polisario intensified its crackdown on dissident voices there amid a total media blackout.

From suppressing critical voices to aid embezzlement, the Algerian regime has turned a blind eye to calls by international rights groups to address the bleak human rights conditions in the camps.