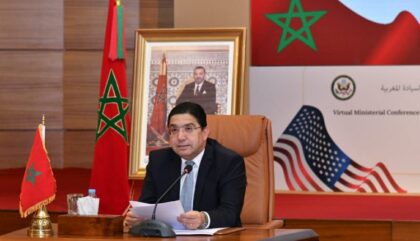 Moroccan Foreign Minister said that the autonomy plan is gaining support among European countries citing France as the first country to back the proposal, but said that Europe needs to adopt bolder positions in view of the fallout of the status-quo on regional peace and stability.

Speaking at a press conference following a ministerial event bringing together 40 countries to express support for the Morocco-proposed autonomy plan, Bourita said Europe needs to leave the comfort of backing the UN process without a clear direction.

The autonomy solution exists and the UN process should be geared to that end, he said.

Bourita also recalled that trade agreements with the EU cover the Sahara territory and that the resolution of the Sahara conflict will have a beneficial impact on regional peace, integration and stability.

He said Morocco is always willing to engage in negotiations but in line with clear criteria and with the participation of the real party to the conflict, Algeria.