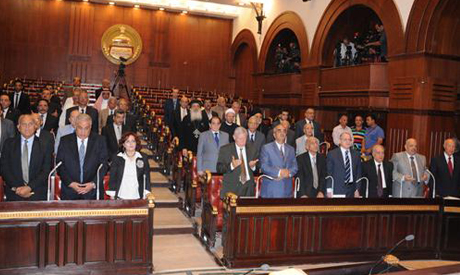 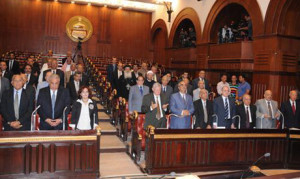 Egypt’s 50-member constitutional committee is almost on the verge of finalizing the constitution but continues to be delayed by “some differences” in within, committee Spokesman Mohamed Salmawy stated. 10 members of the committee walked out of sessions after brutal police interventions to disperse protesters under the new law which restricts public protests. Tamarod also released a statement stating that its representatives in the committee no longer represent the organization.
The constitutional committee has to submit a draft of the revised constitution before December 3rd. It has “almost reached a consensus on the new constitution’s articles” but differ on the content of the preamble, reservation of a certain amount of parliament seats for marginalized sectors of the society and determining a new electoral system, Salmawy said.  He hinted that dedicating a limited amount of seats to marginalized sectors will lead to mechanizing “a favorable electoral system, because the two issues are closely related”.
There are tense arguments whether Egypt should be defined as “civilian state” and its inclusion in the preamble. They also want “Islamic Sharia” to be defined by the preamble. Islamists form a minority of the committee.
Meanwhile, the committee suffered another setback when ten of its members boycotted sessions in protest against police brutality. A new law bans public gatherings of more than 10 people without police came into force this week. Supporters of Morsi who were protesting against the interim government and activists rallying against the newly-adopted law were forcefully broken down.
The interim government came to power after protests organized by Tamarod. The organization has recalled its members from the constitutional committee for internal investigations after taking decisions and adopting political positions in the name of the group without consulting its members.

North Africa Post's news desk is composed of journalists and editors, who are constantly working to provide new and accurate stories to NAP readers.
NEWER POSTEgypt Postpones the Date for the Constitution Referendum
OLDER POSTIslamists Likely to Win Seats in Mauritanian Parliament