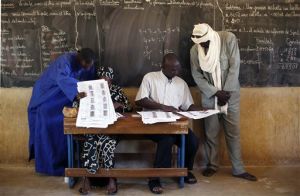 Mauritanians voted in an election over that weekend that was boycotted by most of the radical opposition. While the country’s current President, Mohamed Ould Abdel Aziz, is expected to retain power, the formerly banned Islamist party Tewassoul that wants to establish Sharia law looks poised to win seats in parliament.
It was the first time legislative polls had been held since the incumbent President seized power in a 2008 coup. The vote went forward despite a boycott by 10 out of 11 of the parties in the radical-opposition coalition, who called the vote an “electoral masquerade”. The election commission said Saturday that turnout was at 60 percent and that results were expected by the middle of this week.
Banned until 2007, Tewassoul is associated with Egypt’s Muslim Brotherhood and is slightly more moderate than the Mauretania’s most extreme jihadist fringe. It is the only member of the radical 11-party coalition Coordination of Democratic Opposition (COD) to take part in the poll. While Tewassoul called Saturday’s elections a “struggle against dictatorship”, President Aziz declared after visiting his local polling station that “I think these elections today are a victory for democracy in my country.”
Next to Mali on the west coast of the Sahara, Mauritania’s location and its majority Muslim population make it a strategic player in an increasingly volatile region that has been labeled an Al Qaeda hotbed. Western powers consider the country as a bulwark against rising extremism, though Mauritania’s recent history has been marked by instability. After winning a widely contested presidential vote a year after taking power, Azis has never been accepted by the radical Islamist opposition.