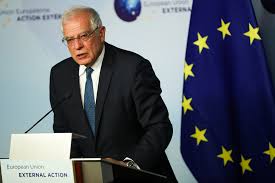 The European Union supports the UN process on the Sahara and looks forward to the resumption of the quadripartite talks, under the aegis of the UN, said EU Foreign Policy Chief at the European Parliament.

The EU position concerning the Sahara is fully aligned with the resolutions of the UN Security Council, underlined on Tuesday Mr. Josep Borrell in his written answer to MEP Thierry Mariani who raised the issue of the embezzlement of the EU humanitarian assistance by the Polisario in connivance with the Algerian authorities.

In his parliamentary statement, Mr. Borell, a former Spanish Foreign Minister, stressed the importance of the joint EU-Morocco Political declaration adopted on 27 June 2019.

In this joint declaration, the two partners, Rabat and EU, reaffirm their “support for the efforts made by the UN Secretary-General to continue the political process aiming to reach a just, realistic, pragmatic, lasting and mutually acceptable political solution to the issue of the Sahara, based on compromise in accordance with the UN Security Council resolutions, and in particular Resolution 2468 of 30 April 2019”.

They also reiterate their strong attachment to regional cooperation, both through the Arab Maghreb Union and bilateral dialogue between neighboring countries in the Maghreb and through their involvement in the bodies, which bring together European and North African countries, such as the Union for the Mediterranean and the “5+5 Dialogue”.