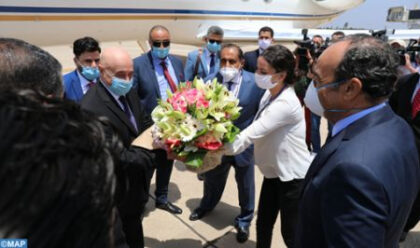 Aguila Saleh, Speaker of the East-based Libyan prohaftar House of Representatives, arrived Sunday in Morocco to seek the Kingdom’s support to his initiative for the resolution of the Libyan conflict.

At a joint press conference held Monday in Rabat with his Moroccan peer Habib El Malki, Aguila Saleh said his initiative is part of the follow-up of the Skhirate political agreement, signed in December 2015 in Morocco.

This initiative calls for the setting up of a presidential council with a view to achieving a political solution to the crisis, and the holding of legislative and presidential elections.

According to some press reports, Khaled al-Meshri, Chairman of the Libyan High Council of State, will also visit Morocco for talks and consultations with Moroccan officials on the Libyan crisis.

Addressing lately the UN Security Council via videoconference, Moroccan foreign minister had warned about the regional and international fallout of the deteriorating security, political and economic situation in Libya.

He had also reiterated Morocco’s supportive position of the UN Skhirate agreement, noting that multiplying initiatives will be counterproductive.

“The Skhirate Agreement is not perfect. But, there is no other valid alternative on the table. Its provisions have to be adjusted and updated by the brothers in Libya,” underlined Morocco’s top diplomat.