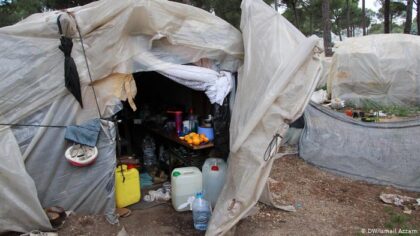 The UN has rebuked Spain for the inhuman treatment suffered by thousands of Moroccan women who work as seasonal workers in the strawberry farms of the Huelva region.

His warning came after three fires broke out in migrant shanty towns in Andalusia.

“This reality of fires and inhumane conditions in the shanty towns cannot be tolerated any longer,” he said.

“The situation is deteriorating alarmingly each day, made worse amid the COVID-19 pandemic,” de Schutter said.

After the UN criticism, Spanish soldiers have been sent to build a camp for migrant strawberry pickers.

Early June, eight NGOs, including the international organization Women’s Link Worldwide, have called on the United Nations to investigate urgently the human rights violations suffered by the Moroccan women seasonal workers and other migrants who work in the strawberry and red fruit harvest in Huelva, Spain.

The NGOs warned of the risk that COVID-19 pandemic poses to the rights of Moroccan temporary workers and the rest of the migrant working population, who were already in a situation of vulnerability due to labor exploitation and the different forms of violence they have suffered for years.

According to the NGOs, the temporary workers were exposed to new forms of exploitation after they lost their jobs due to covid-19 lockdown and borders closure, with a greater impunity in cases of violence, especially sexual violence, and the difficulties of the strawberry migrant workers to access healthcare and justice.

Morocco started repatriating its seasonal workers from Huelva on July 18, in collaboration with the Spanish government and the Autonomous Community of Andalusia.

Some 7,100 seasonal Moroccan workers took part in the agricultural campaign in Huelva, as part of the circular migration program between the two countries.