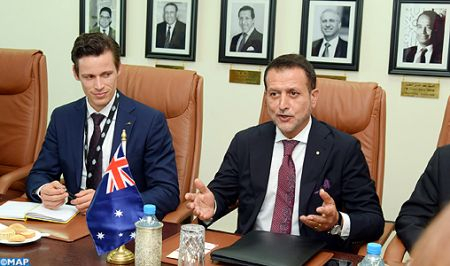 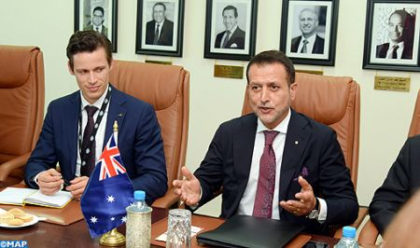 Chairman of Australia-Arab Chamber of Commerce & Industry Roland Jabbour has voiced his country’s full backing to Morocco’s territorial integrity and sovereignty over the Sahara.

Speaking to journalists following a meeting Thursday in Rabat with Moroccan Secretary of State to Foreign Affairs Mounia Boucetta, Mr. Roland said: “We strongly support the sovereignty of the Kingdom of Morocco over the Sahara and back the country’s territorial integrity”, affirming that unity leads to economic prosperity.

He also hailed the socioeconomic progress and development accomplished by Morocco in all sectors, expressing willingness to explore partnership projects and ways to enhancing cooperation with the North African Kingdom, which offers, he said, huge business opportunities to investors.

Thanks to its geostrategic position, political stability and economic openness, Morocco has become a gateway for investment to Africa and Europe, he added, noting that partnership with the Kingdom will enable Australian businessmen direct access to the markets of both continents through the many free trade agreements Rabat sealed with the European and African countries.

Moroccan-Australian bilateral trade reached $89.3 million in 2016, of which Australia imported $ 66.1 million from Morocco and exported $23.2 million.

Despite the long distance between the two countries, some 40,000 Australians visit Morocco every year.

According to Australia’s ambassador to Morocco Owen-Jones, the two countries can do better and bolster their trade and investment in the fields of food and agriculture, infrastructure, maritime transport, sustainable development and mining.

She said Morocco and Australia share political willingness to forge a win-win partnership in investments, trade, peace, security, the fight against terrorism and climate change.