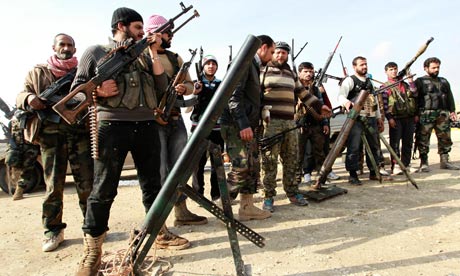 Western Dilemma in Syria: To Arm or Not to Arm

After years of counter-insurgency wars in Iraq and Afghanistan and democracy promotion in the Arab world, many Western capitals would like to return to more realist foreign policy approaches and avoid being drawn into messy civil wars.

In Syria, however, this desire meets a reality that is everything but acquiescing. Yet, if Western nations take their own interests and values seriously, they cannot sit idly by much longer. The death toll is now well above seventy thousand and the regime is still holding on to power, fully intent on slaughtering not only the armed opposition but any opposition it can find. Clearly, the time has come for the West to take some meaningful action beyond weapons and economic embargoes. In fact, this time has nearly passed.

In the meantime, the conflict is a showcase of why waiting to take action is usually a bad idea. The longer a civil war lasts, the more fragmented the warring sides become. This holds true for most civil wars, be they in Lebanon during the 1980s or in Somalia in the 1990s – which is also why it is mostly a bad idea to wait for a conflict to resolve itself. Even if such a conflict ends with one side prevailing, the room for compromise and a long-term settlement is usually rather small. The fragmentation of rebels and forces allied with the government has created too many actors that need to work hard together to find a political solution.

But while the West is still weighing its options in Syria, an intervention of a different sort has long started. Iran and Russia continue to deliver arms to the embattled regime and there are reports indicating that Hezbollah has committed a number of its fighters to help the Syrian dictatorship survive. Against such powerful actors, it is hardly surprising that the Syrian opposition is taking every help it can get, even if it is in form of Islamist fighters. But Western observers nevertheless tend to forget that, given a choice, nearly every insurgent prefers to be allied with the United States and its partners rather than a gang of ragtag Islamists. Whether it has been in Bosnia, Libya or Iraq, once the West does take an interest, rebels and insurgents prefer to have the US and its allies on their side.

What the Syrian situation demonstrates is that all too often it is assumed that not acting does not produce costs, whereas any action comes with a price-tag. This systemic bias against action is all too understandable. After all, the costs of acting can usually be anticipated, taxed or at least be described. The costs of not acting cannot, even though they are part of the equation. Not acting decisively in Syria has demonstrated that the opposition is fragmented and radical Islamists are ascending. Once Assad is gone, the aftermath will probably be messy – yet the West does not only have an interest in seeing Assad leave, but also in ensuring that a ‘new’ Syria that will emerge will be as stable and unified as possible. If the West has an interest in shaping the post-Assad Syria, it is high time it starts building influence through leadership and, yes, delivery of arms to the part of the opposition it wants to see prevail.