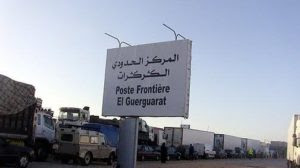 Morocco has rejected an initiative put forward by the UN Secretary General, Ban Ki-Moon, whereby the UN takes over the works to asphalt the Guegarat road on the borders with Mauritania, Moroccan news outlets reported.

In an attempt to avert a resumption of hostilities between the Royal Armed Forces and the Algerian-backed Polisario separatists, the UN proposed completing the remaining phase of the asphalt paving of the Guergarat road beyond the security wall in the southernmost tip of the southern provinces.

The UN has already voiced concerns over a return to arms in the Sahara after the Polisario violated the cease-fire agreement by introducing armed fighters in the buffer zone in a desperate attempt to prevent Morocco from paving the road. Morocco undertook the road asphalting works after it launched a successful police and customs operation to clear the area from all sorts of illegal commercial activities.

The UN proposal, which was relayed on Innercity blog, aims to replace Moroccan authorities in completing the road paving. In return, the Polisario will be asked to withdraw its armed men from the vicinity of the road.

In a recent interview with the Moroccan news agency, Morocco’s Permanent Representative at the UN headquarters in New York, Ambassador Omar Hilale, said the Royal Armed Forces are showing restraint while remaining vigilant and prepared to defend the homeland against any threat. The Moroccan diplomat said that a large number of Security Council members denounced the violation of the Military Agreement No 1 and the calls to resume hostilities on the backdrop of the road construction in Guergarat by Moroccan authorities.

The diplomat recalled that Morocco explained to the Security Council the nature of the anti-smuggling operation in Guergarat and the need for building a 3km-long road in that area to safeguard Morocco’s security.

The road is key to monitoring the area, which was turned by criminal networks into a venue for engaging in all sorts of illegal commercial activities, including the trafficking of arms, drugs and humans, he said, noting that the asphalting of that road was undertaken in coordination with the MINURSO and Mauritania.

North Africa Post's news desk is composed of journalists and editors, who are constantly working to provide new and accurate stories to NAP readers.
NEWER POSTOil Supply to Continue to Outstrip Demand in First Half of 2017- IEA Says
OLDER POSTMorocco Condemns ‘Sue the Saudis 9/11’ Bill