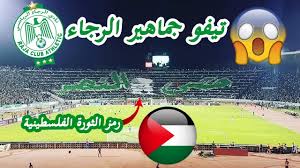 Mohammed VI Cup: Raja and Wydad cruise to the round of 16

Casablanca’s two major teams, Raja and Wydad, have booked their tickets for the knockout stages of the Arab Cup of Champion Clubs, the Mohammed VI Cup, named this year after Morocco’s King.

The goals were scored in the second half by Fabrice Ngoma and Ayoub Nanah.

Raja players seized the opportunity of their visit in occupied Palestine to perform the Friday prayer at the Al Aqsa Mosque.

The two goals were scored by Salaheddine Saidi and Ayoub El Amloud.

The draw for the knockout stages of the competition will take place Saturday October 5 in Riyadh.

North Africa Post's news desk is composed of journalists and editors, who are constantly working to provide new and accurate stories to NAP readers.
NEWER POSTCybersecurity: More than 5 million attacks detected in Morocco in second quarter of 2019
OLDER POSTTunisia: Nabil Karoui to sue people behind smear campaign in connection to lobbying firm