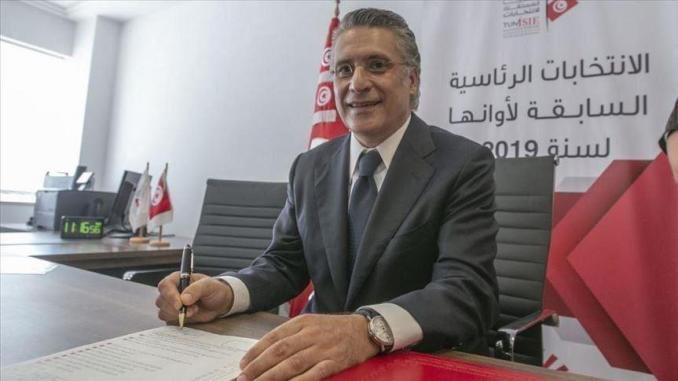 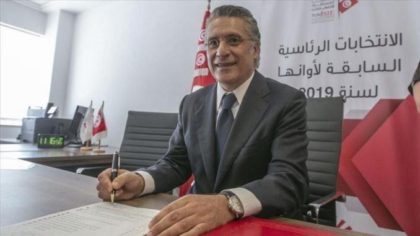 The party of presidential hopeful, currently in prison on money laundering charges, has pledged to sue people behind the revelation that the businessman signed a $1 million-deal with a Canada-based lobbying firm to promote his candidacy.

“There is no connection, whether close or in law between Nabil Karoui, candidate for the runoff at the presidential elections, and the signatories of the contract and the content. This story is part of strong smear campaigns run against Nabil Karoui, over several years and that have crossed all red lines. We can no longer keep quiet in face of those actions,” the party said.

A lawyer representing the jailed Tunisian presidential candidatealso confirmed that he and his campaign have “no connection” to the $1m contract with a Canadian lobbying firm taken out in late August to secure Karoui’s election.

The US Justice Department has published a copy of the alleged one-year contact in which the lobby firm is tasked to promote the media mogul in the US, in the Russian federation and at level of the United Nations.

The four-page contract was reportedly signed in August, before Karoui announced his candidacy for the election. Unidentified Mohamed Bouderbala inked the deal on behalf of Karoui while Dickens & Maddison was represented by its boss Ari Ben Menashe; a Tehran-born former Israeli spy agent, also known as the dictators’ lobbyist.

According to the contract, Menashe pledges to arrange meetings with US President Donald Trump and Russian leader Vladimir Putin. The firm also promises to “obtain material support for the push for the Presidency”.

The Canadian firm, according to the contract, received an initial instalment of $250,000 and will receive the rest mid-October, after the electoral process.

The Tunisian electoral body put the ceiling on campaign spending at $630,000 for the first round of the presidential vote on September 15 and about $360,000 for the runoff.

Karoui in prison since late August on money laundering and tax evasion charges, came second with 15.6 per cent of votes during the first round in September. He will face in runoff on October 13 independent candidate Kais Saied who won 18.7 pc of votes.

The campaign for the presidential runoff election started on Thursday October 3.
The polls are set for October 13 at home and October 11, 12 and 13 abroad.

North Africa Post's news desk is composed of journalists and editors, who are constantly working to provide new and accurate stories to NAP readers.
NEWER POSTMohammed VI Cup: Raja and Wydad cruise to the round of 16
OLDER POSTSpirit AeroSystems, Major Bidder for Bombardier Plants in Morocco & Belfast