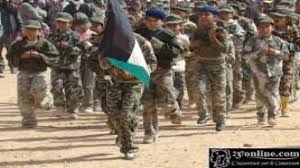 A group of Italian NGOs staged protests recently to denounce the use by the Polisario of children in an utter violation of their basic rights.

The Polisario has gained a notoriety over the years for enrolling children in the ranks of its militias and for forcibly sending them to countries such as Cuba where they endure indoctrination.

Children in the Algerian-run polisario camps have also been deprived of their right to education as the Polisario leadership continues to confiscate their dreams to a stable life in order to enlist them as potential soldiers.

Italian NGOs members drew attention to the practice by the Polisario of sending children to vacations abroad where their supervisors continue to spread hate speech and dogmas that run against human rights.

“We are convinced that these initiatives are used to disguise the suffering that prevails in the camps where we had the chance to meet and witness violations of basic human rights as expressed in the Geneva convention for refugees,” said president of the Italian Institute for International economy and politics, Domenico Letizia.

“We warn Italian institutions of Polisario’s propaganda and call on the international community to find a lasting political solution to regional conflicts,” he said.

This breach of the rights of children to education and healthy development was repeatedly denounced in Geneva before the international community, which is asked more than ever to put an end to such a degrading and inhuman treatment inflicted on innocent children.

In this respect, a sit-in was held by an alliance of Moroccan Sahraouis in Europe dubbed “White Dove” on the sidelines of the 41st Human Rights Council session.

The protesters denounced the inhuman treatment endured by Sahraoui children under the yoke of Polisario militiamen within the Algerian territory.

Children, instead of going to schools and learning about lofty values, are forced to learn to handle firearms and undergo military training by the Polisario militiamen who show no consideration for the children’s age and development needs.

The Polisario has been for long lambasted by international rights organizations for indoctrinating children. The Algeria-backed separatists have also separated children from their families to be sent for communist military training in Cuba since the 1970s.

A year ago, the representation of the Vatican in Morocco strongly denounced in a statement the political use by the Polisario of the children of the Tindouf camps.