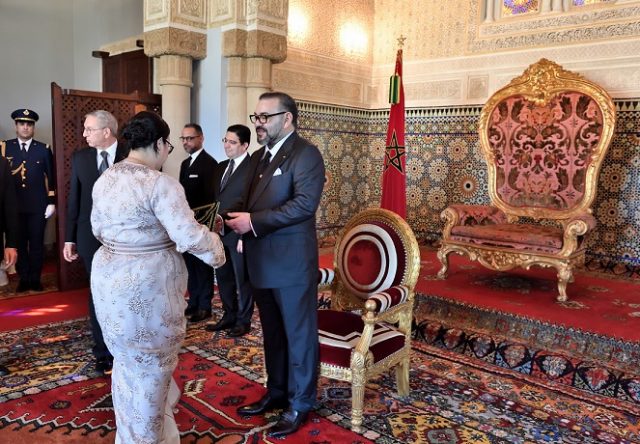 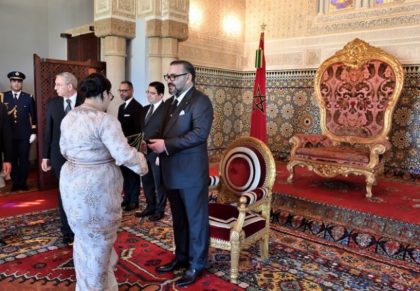 King Mohammed VI received, on Tuesday at the Royal Palace in Rabat, several new ambassadors and handed them their appointment Dahirs.

For the first time, the list of new ambassadors includes the appointment of a woman to the Vatican. Actually, scholar Rajaa Naji Mekkaoui has been appointed to the Vatican and the Sovereign Military Order of Malta.

Morocco’s mission to the Russian Federation will be headed by Lotfi Bouchaara.

Ahmed Rahhou will join his new position as Head of Morocco’s Mission to the European Union and to the European Atomic Energy Community, while Mohamed Ali Lazrak will be Ambassador to Turkey; Zouhour Alaoui to Germany; Azzedine Farhane to Austria, the Slovak Republic and Slovenia; Youssef Balla to Italy, San Marino, Malta, and Albania; Abderrahim Atmoun to Poland; Mohamed Achkalou to Finland and Estonia, and Hassan Abou Ayoub, to Romania and the Republic of Moldova.

Yassir Fares, Abdelfettah Lebbar, and Amine Chaoudri will head Morocco’s missions respectively in Argentina, the United Mexican States and Belize, and Peru and Bolivia, while Jamal Chouaibi will be positioned as Ambassador to Vietnam.

Samir Dhar will be Morocco’s permanent representative to the UNESCO.

After the new ambassadors were sworn in, King Mohammed VI received several foreign ambassadors who took leave of the Sovereign at the end of their mission in the Kingdom.

The Sovereign decorated three of the leaving ambassadors with the Grand cordon of Wissam Alaoui (exceptional Class), namely the ambassadors of France, Qatar and Mali.