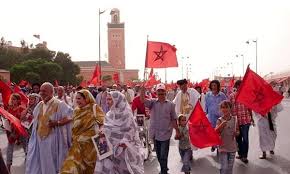 Manama, Riyadh Renew Support to Morocco’s Sovereignty over the Sahara

Bahrain and Saudi Arabia have both renewed this week backing to Morocco’s legitimate rights over its southern provinces and reaffirmed rejection of any attack on Morocco’s supreme interests, sovereignty and territorial integrity.

In Manama, the Foreign Ministry renewed in a statement Bahrain’s supportive position to Morocco’s legitimate rights over its southern provinces, and its backing to the autonomy plan offered by Rabat for the settlement of the Sahara regional conflict.

Manama also expressed support for all efforts aimed at reaching a political solution to the Sahara issue within the framework of Morocco’s sovereignty and hailed the development projects launched in this region.

The statement affirmed that Bahrain will always support Morocco against all threats targeting its sovereignty and territorial unity.

In New York, Saudi diplomat Faycel Bin Nacer El Hekbani reiterated in an address at the UN Committee of 24 Saudi Arabia’s rejection of any attack on Morocco’s supreme interests, sovereignty and territorial integrity.

The Saudi diplomat underlined that “sisterly Morocco has contributed with seriousness and in good faith to the efforts made, under the exclusive auspices of the United Nations, to find a lasting solution to the Sahara issue.”

El Hekbani, whose remarks were reproduced by Saudi News Agency, reiterated his country’s support for Morocco’s efforts to find a solution to this regional conflict, and stressed the importance of showing realism and a spirit of consensus between all parties involved, as the settlement of this issue requires a climate of serenity.

Reaffirming the position of principle of Saudi Arabia regarding the support of the Moroccan autonomy proposal, the Saudi delegate said Morocco’s autonomy plan guarantees to the inhabitants of the southern provinces a free and effective participation in the economic, social and cultural development of their region, while taking into account the Sahrawi particularities and traditions.

The autonomy initiative is a consensual solution in line with international law, the UN Charter, and the resolutions by the Security Council and the General Assembly, said the Saudi diplomat, noting that this plan meets the principle of self-determination.

El Hekbani commended efforts of the Moroccan government to achieve economic and social development in its southern provinces, while welcoming the $8 billion development plan launched by Morocco in the Sahara in 2015 in a bid to improve the living conditions of the local population.

The Bahraini Foreign Ministry’s statement and the Saudi diplomat’s address have both hailed the efforts of the UN Secretary-General to resume political negotiations in accordance with the parameters set by the Security Council since 2007, notably resolution 2468 adopted on April 30, 2019, which underlines the need for a political, realistic, consensual and durable solution to the Sahara issue.