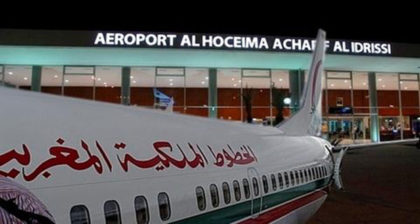 Morocco’s national carrier Royal Air Maroc (RAM) is to launch as of July 10 two new flights to the port city of Al Hoceima, in the restive Rif region at the request of the tourism ministry.

The two new flight routes; Casablanca-Al Hoceima and Tangier-Al Hoceima will be operational next Monday, in a move to rekindle tourism activities in the city and in the region following months of unrest.

The decision to open these new routes is part of a series of urgent steps taken by the tourism ministry in collaboration with Tangier-Tetouan-Al Hoceima region, to revive tourism in Al Hoceima.

“This action aims at contributing to the opening up of the region and will be supplemented by other measures namely the reduction in airport taxes,” the ministry said.

The Moroccan northern city has witnessed unrest, following the gruesome death of Mouhcine Fikri, a fishmonger who was crushed to death in October last year in a garbage compactor as he tried to retrieve fish that the police had confiscated and thrown away.

The government has struggled in its response. It sought to calm public anger by proceeding swiftly with investigations into the incident and tried to address the underlying causes of the anger, notably by proposing new economic and social development programs. But the process was slow.

King Mohammed VI, during a Ministers’ Council late last month, chided the government for negligence and delay in the completion of several development and social projects in Al Hoceima, planned under the program dubbed “Al-Hoceima, Manarat Al Moutawassit”.
Actually, long before the wave of popular protests outbroke in the Rif, King Mohammed VI launched in October 2015 the Al Hoceima Lighthouse of the Mediterranean program, worth $665-million.

The program is meant to promote the region’s development through implementing a host of projects slated for completion in 2019. Unfortunately, many of the projects scheduled in the program never saw the light of the day due to the lack of follow-up by relevant ministries.
During the Ministers’ Council, the monarch expressed his “disappointment, discontent and concern,” over the slow pace in the carrying out of the development projects designed for the region since 2015.

He gave directives to cancel the annual leaves of the Ministers in charge of the projects follow-up and ordered relevant services within the Interior and Finance Ministries to conduct a probe to determine those responsible for stalling some projects.

The investigations have already started and several senior officials were questioned by the investigating committee.