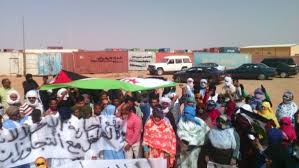 A group of sixty Sahrawis of the Tindouf camps, southern Algeria, staged lately a sit-in in front of the Headquarters of the High Commissioner for Refugees (UNHCR), to demand the protection of the United Nations against the oppression and tyranny of the Polisario militiamen.

The protesters, who gathered outside UNHCR headquarters on June 13, decried the disengagement of the UN from its duties and failure to shoulder its responsibilities in protecting the rights of Sahrawis who are held against their will in the Tindouf camps and deprived of their basic human rights.

Fed up with the feckless, despotic and corrupt Polisario leaders, the protesters, who were holding banners and posters, denounced the separatists’ lies and ruthless repressive campaign

According to press reports, after the deployment of 14-vehicles of the security services of the separatists near the protest site, the Sahrawi demonstrators moved their sit-in to the Headquarters of the “Polisario General Secretariat”, to make their voices heard.

The Sahrawi protestors are planning another protest this week to denounce the lamentable situation, hardship and abuses suffered by the sequestered Sahrawis inhabitants, taken hostage by the Polisario to serve the agenda of the Algerian Generals.