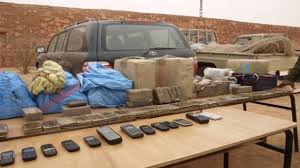 Sahara-Narcotics: Polisario Shifts Its Drugs Trafficking to South of Dakhla

The Polisario Front, which is drowning in hot water and under fire from all sides, seeks to stir up trouble in the Moroccan Sahara in a desperate attempt to divert attention from the diplomatic setbacks it suffered on the international scene.

The Polisario leaders not only encourage their agents to block road traffic at the Guergarate crossing point between southern Morocco and Northern Mauritania, but they also seek to boost illegal trafficking of all kinds, including smuggling counterfeit goods and narcotics to raise money, after their financial resources dried as their Algerian supporters stopped providing funds, Algerian rulers being focused on the explosive internal situation in their country rocked by an unprecedented popular uprising since February 22.

The Royal Gendarmerie intercepted two individuals aboard a Nissan Patrol SUV car with a fake number plate, carrying 1.5 ton of cannabis, Kalashnikov rifle and ammunitions, while the Royal Navy seized in southern Dakhla a fishing trawler carrying 100 kg of cannabis and 600 liters of fuel.

Moroccan security forces in the southern zone are currently on high alert to foil attempts by mafia groups with links to the Polisario, to turn the region into an international hub for drugs trafficking.