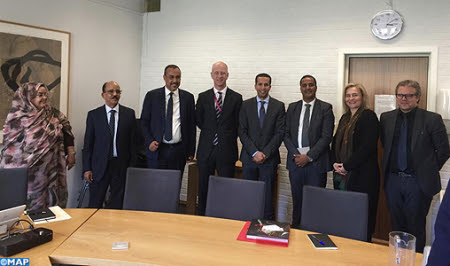 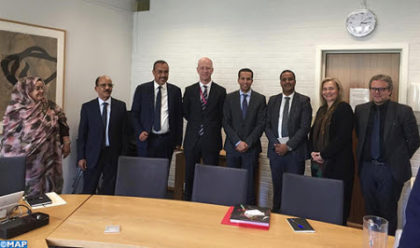 A delegation of elected representatives from Morocco’s southern provinces conferred on Tuesday in Oslo with officials from the Norwegian ministry of Foreign Affairs and members of the Parliament on latest developments of the Moroccan Sahara issue.

During the meetings, held in presence of Moroccan ambassador to Norway Lamia Radi, the Sahrawi delegation focused on the autonomy plan offered by Morocco with a view to reaching a final political settlement to the Sahara regional conflict.

The members of the Moroccan delegation also made presentations on the tremendous socioeconomic progress accomplished in the southern provinces.

In a statement to MAP correspondent, chairman of Dakhla-Oued Eddahab Regional Council, Yanja El Khattat, described these meetings as “fruitful and positive”, underlining that they allowed the Norwegian officials to have a clearer idea on the Sahara issue.

“We have provided them with very precise information and presented different aspects of development in our southern regions,” said El Khattat, Head of the Moroccan delegation.

“We have also stressed that the Moroccan autonomy initiative aims at reaching a sustainable, mutually accepted solution”, he added.

Talks with the Norwegians also focused on ways of boosting bilateral relations and the role Morocco plays in the Maghreb for the security and stability of the region thanks to the development process initiated by King Mohammed VI, he said.

The Moroccan delegation met with Michael Tetzschner, First Vice Chair of the Standing Committee on Foreign Affairs at the Norwegian Parliament, Ingjerd Schou, member of this Committee, and Vebjorn Dysvik, a senior official at the Norwegian Foreign Ministry.