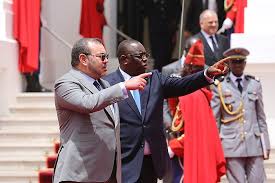 King Mohammed VI sent a message of congratulations to President of Senegal Macky Sall upon his re-election to the highest office of his country.

In this message, the Sovereign expressed, in his name and on behalf of the Moroccan people, to the President of Senegal his warm congratulations and sincere wishes for full success in this new mandate.

“Your reelection, in the first round, is a vibrant tribute paid by the brotherly Senegalese people to your personal qualities and to your commitment to serve its social and economic progress,” the Sovereign said in his message.

Through this reelection, the Senegalese people evidences “its adherence to your political choices and the consideration that it bears to the important achievements made by your country, under your enlightened leadership,” underlines the Sovereign.

King Mohammed VI hailed the fact that Morocco and Senegal are united, not only by an exceptional partnership but also and especially by historical ties of fraternal friendship and active solidarity. He renewed his firm and unwavering determination to work with Macky Sall to bring the Moroccan-Senegalese partnership to the highest level, for the great benefit of the two sister countries, and to serve a global and sustainable development of the African continent.

Macky Sall has been re-elected president of Senegal for a second term, according to provisional results published on Thursday.

Figures released by the National Vote Counting Commission showed that Macky Sall won Sunday’s first round outright, picking up 58.27 percent of the vote.