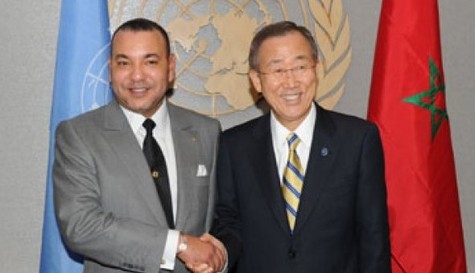 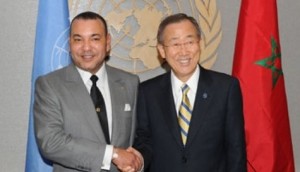 Morocco has expressed concern about the United Nations Organization’s biased stands when it comes to the issue of human rights in Western Sahara and in the Algeria-based Tindouf camps that are run by the separatist Polisario Front.
The worries were reignited by the report that the UN Secretary General Ban Ki -Moon is to submit this week to the UN Security Council on the Western Sahara issue.
A phrase in the report actually underscores the need to monitor human rights respect in Western Sahara in a “sustainable, independent and impartial way,” overlooking the serious human rights abuses committed in the Tindouf camps.
To set the record straight, Morocco’s king, in a phone talk with the UN secretary General last Saturday, stressed the need to preserve the negotiations parameters as defined by the Security Council and to avoid biased approaches and risky options.
King Mohammed VI warned that the very involvement of the UN in the Western Sahara issue may be jeopardized and the whole process may be derailed if the world body strays from the track drawn by the Security Council and the international community.
Last year, the U.S. ambassador to the UN had tabled a draft resolution seeking to expand the MINURSO mandate to human rights monitoring in the Western Sahara, but Morocco’s strong rejection of the move resulted in the withdrawing of the draft.
After that incident that strained somehow USA-Morocco relations, Washington has repeatedly reiterated its support for a solution to the Western Sahara conflict based on a formula of autonomy under Moroccan sovereignty as proposed by Morocco in 2007.
This longstanding US policy on the Western Sahara has been reiterated by President Barak Obama when he met the King of Morocco in November last year in the White House and by Secretary of State John Kerry earlier this month when he was in Rabat to chair the second session of the USA-Morocco Strategic Dialogue.
Deputy Assistant Secretary of State for Egypt and Maghreb Affairs, William Roebuck, renewed the same stand when he was testifying at a hearing held last week at The House Foreign Affairs Subcommittee on the Middle East and North Africa on US policy and support for Morocco.
“US policy toward the Western Sahara has remained consistent for many years,” he said.
William Roebuck also underscored “the growing role” of Morocco’s National Council for Human Rights “as a credible and proactive defender of human rights,” and cited the country’s “important steps forward in strengthening the protection of human rights.”
Earlier this year, the UN congress had expressed strong bipartisan support for a law, part of the 2014 Appropriations Bill, providing for the first time that US assistance designated for Morocco be used in the Western Sahara. The measure represented a significant reinforcement of US policy supporting a solution to the Western Sahara conflict based on autonomy under Moroccan sovereignty and recognizing the Moroccan Autonomy initiative as “serious, realistic, and credible.”
Besides the US unambiguous support to the autonomy initiative as a basis for a lasting settlement, many observers deem that any attempt to distort the mandate of MINURSO, which is entrusted with monitoring a cease-fire in the disputed territory, constitute a deviation from the track drawn by the United Nations, with the parties’ agreement, to find a peaceful, fair and lasting settlement to the conflict.
Any change would also violate the essence of Security Council resolution 1754 (March 2007) calling to find a compromise solution to the dispute on the basis of the Morocco-proposed autonomy initiative.
According to some commentators, expanding the MINURSO mandate as requested by Algeria and the Polisario would mean that the UNO is no longer playing its role as an impartial mediator and is siding with a party to the conflict. This would be in total contradiction with the UN principles of impartiality, neutrality and independence.