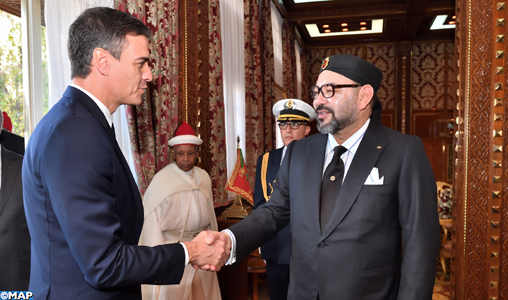 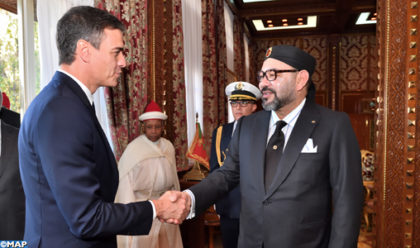 Morocco and Spain are both keen on consolidating their political dialogue and giving more momentum to their economic partnership, in particular by enhancing the role of the private sector.

This is implied in the statement released Monday in Rabat by the Royal Office following the audience King Mohammed VI granted to the President of the Spanish Government Pedro Sanchez who was on an official visit to Morocco, as part of the strengthening of the strategic partnership between the two Kingdoms.

The meeting was an opportunity to review the different aspects of bilateral relations in their political, economic, security and cultural dimension as well as topical regional and international issues, the statement said.

“King Mohammed VI and the President of the Spanish Government agreed on the need to further boost bilateral relations by consolidating political dialogue and giving more dynamism to the concrete economic partnership, in particular by enhancing the role of the private sector,” added the Royal Office statement.

The two interlocutors noted “the excellent” relations binding the two countries and their convergence of views on all the issues raised, and welcomed the level of their cooperation to take up the various regional challenges facing them, including development, security and stability in Africa, the Mediterranean and the Middle East.

The audience was attended by the two countries’ Ministers of the Interior Fernando Grande-Marlaska and Abdelouafi Laftit, and other Spanish and Moroccan officials.

In a statement to the media upon leaving Morocco, The Spanish Prime Minister described the royal audience as “extremely positive”, saying it provided an opportunity to exchange views on topics of mutual interest.

He hailed the leadership of the Moroccan Sovereign in Africa, particularly with the return of Morocco to the African Union (AU), as well as in the field of migration, a global phenomenon affecting several countries.

The meeting also focused on the holding of a high-level meeting between the two governments in 2019 and a Moroccan-Spanish business forum to further deepen the economic, political and cultural relations between the two countries, he said.

During his trip in Rabat, the Spanish official also met his Moroccan peer Saad Eddine EL Othmani. Talks focused on security and economic cooperation and on migration, an issue that is of concern to both countries.

Talks also tackled preparations for a visit of King Felipe VI and Queen Letizia to Morocco in 2019 as well as the presentation of a joint Moroccan, Spanish and Portuguese bid to host the World Cup in 2030.

North Africa Post's news desk is composed of journalists and editors, who are constantly working to provide new and accurate stories to NAP readers.
NEWER POSTSpain to Team up with Morocco & Portugal in 2030 World Cup Bid
OLDER POSTMoroccan Jews Celebrate Centuries-old History of Tolerance in Marrakech