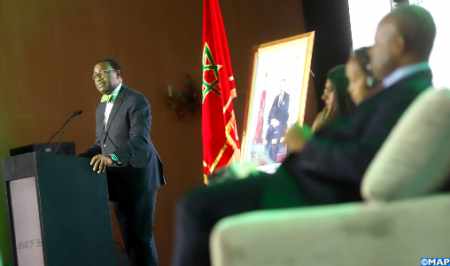 President of the African Development Bank (AfDB) and Chairman of the Africa50 Board of Directors, Akinwumi Adesina, hailed on Tuesday in Marrakech the coherence of Morocco’s development plan and the resilience of its economy, which has demonstrated its ability to successfully emerge from the Covid-19 crisis.

“I salute the Moroccan authorities for the coherence of their development plan and the resilience of the economy. Morocco has demonstrated its ability to successfully emerge from the Covid-19 crisis, thanks to the dynamism of its government, the courage of its people and the strength of its private sector, under the enlightened leadership of H.M. King Mohammed VI,” Adesina said at the opening of the Africa50 General Shareholders’ Meeting.

Morocco is “a model” in Africa on numerous important issues, such as the generalization of social protection, regional integration, agricultural innovations, digital transformation and also on the crucial issue of climate transition, he said.

The AfDB chief also recalled that the Kingdom is home to the solar complex which includes the “Noor Ouarzazate” power plant, the largest concentrated solar power plant in the world, which was financed by the AfDB.

Adesina noted that Morocco and the AfDB are bound by a “historic” partnership for over half a century, recalling that the African bank funded over 170 projects in the Kingdom, totaling 12 billion dollars.

Morocco was one of the first countries that supported the creation of Africa50 and it hosts its headquarters, he stated, reiterating his full commitment to further bolster collaboration between the two parties.

The MoU follows a letter of intent signed last June in Rabat during the launch conference of the ASIF.

Under this agreement, the signatory parties agree to work together to boost financing and strengthen the acquisition of skills and expertise in the infrastructure sector.

The collaboration will also focus on research and project preparation, which are key to securing financing.

The Africa50 shareholders’ meeting, held under the theme “Accelerated and Resilient Recovery,” was attended by African Ministers of Finance and other senior government officials representing Africa50’s shareholder countries, as well as heads of institutions, the diplomatic corps, and leading business operators from Morocco, Africa and eleswhere.

Africa50 is an investment platform created by African Heads of State and the AfDB with the aim of developing and investing in high-impact infrastructure projects through public and private funds.

North Africa Post's news desk is composed of journalists and editors, who are constantly working to provide new and accurate stories to NAP readers.
NEWER POSTMorocco’s OCP gets €570 million for the development of a brand new college campus for UM6P close to Rabat
OLDER POSTMorocco calls for leveraging more private funds in African infrastructure