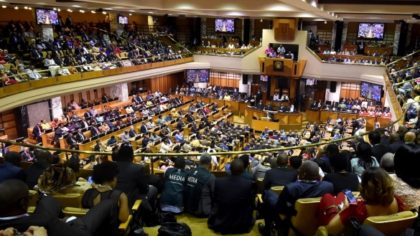 Morocco’s membership in the Pan-African Parliament was formally enacted at the opening of the sixth ordinary session of the pan-African body in Midrand, near Johannesburg, on Monday.

Five Moroccan MPs representing the Justice and Development Party (PJD), the Authenticity and Modernity Party (PAM), the Constitutional Union (UC), the Istiqlal Party (PI) and the Popular Movement (MP) were sworn in, alongside 73 deputies from other countries.

The formalization of Morocco’s membership in the Pan-African body, which completes Morocco’s accession to the various bodies of the African Union, will thus strengthen its role on the African stage and give a new dimension to its contribution to the political, legislative and economic efforts meant to bolster the continent’s development.

The South Africa-based PAP is an AU Consultative Assembly that brings together MPs from AU member countries. The PAP holds at least two regular sessions a year and has ten standing committees. Its bureau is made up of a president and four vice-presidents representing the five geographical regions of the continent.