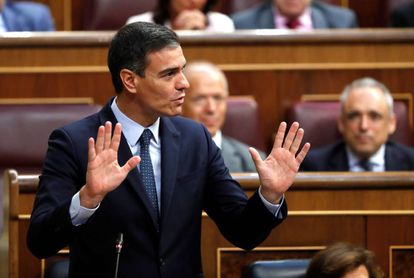 Spain’s PM: “It is in the interest of EU to maintain good relations with Rabat”

Spanish Prime minister Pedro Sanchez has highlighted the excellent cooperation ties existing between his country and Morocco, affirming that it is in the interest of the EU to maintain good relations with Rabat.

Addressing on Tuesday the Spanish lawmakers, Pedro Sanchez stressed the strategic importance of maintaining good relations with neighboring Morocco not only for the sake of Spain but also for the sake of the entire European Union.

Last year, trade with Morocco has increased by 33%, reaching nearly 10 billion euros, while inbound irregular migrants declined significantly thanks to Morocco’s engagement, said the Spanish PM who distanced himself from the hostile resolution passed lately by the European Parliament against Rabat.

The upcoming meeting of the High-Level Moroccan-Spanish meeting will give new impetus to bilateral cooperation based on the new roadmap set by two neighbors and strategic partners, underlined Mr. Pedro.