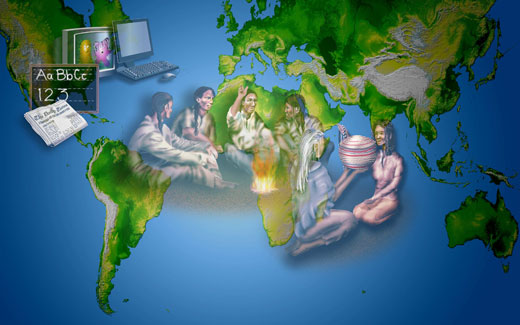 The Globalization of Education through Technology: Valid on Whose Terms?

Technology is being actively promoted through curriculum reform and funding policies around the world as the way to facilitate equity and globalize education opportunities. With the use of technology in middle-income countries, including many North African and Asian countries on the rise, it is expected that better education opportunities through globalization, leading to improved economies, are bound to follow. But the truth of all this depends upon whose values globalization is based.

Globalization through technology and the worthiness of certain information and resources over others seems to be currently on the terms of the Western world and higher-income economies.  The very notion of globalization through technology is creating a divide between not only those lucky few who have technology and those who have not, but also between those who hold Western values and wish to perpetuate hegemony and those who have other value systems.  The 2010 UNESCO report on ‘Mobilizing resources for international development cooperation in education’ has even suggested that many countries now have a lower achieving economy than the official beginning of globalization 15 years ago, despite the rise in availability and use of technology.

For example, in a primary classroom in a middle-income country like Indonesia, I am now able to expose my students to many international resources, deemed worthwhile educational resources, that many students all over the world would otherwise not be able to experience.  We can take a tour of the National Gallery in London and discuss classic works of art from around the world. We are able to tune into the Khan Academy for fun math lessons to help students understand basic math processes. We can participate in interactive games covering all essential basic curriculum content areas and pit ourselves against children of all nations and cultures. These ‘amazing tools’ provide equal access to educational content, advancing the levels of educational equity for all. But on whose criteria are the internationally available, accessible-to-all, ‘valuable’ resources actually valuable? Well, that appears to be supporters of globalization, which roughly translates as the Western world. While middle-income Asian and African countries, such as Indonesia, Tunisia or Morocco, have growing access to these global resources, they do not necessarily hold the same values. Globalization can only be considered as an opportunity for equality when critical pedagogy is employed ensuring the curriculum content is relevant to everyone.

So, having seen that educational content promoted through globalization is not necessarily appropriate for everyone, we need to look at how a middle-income a predominantly Muslim country, such as Indonesia, can promote a critical pedagogy to promote the content of our globalised classrooms. Currently, middle-income countries are buying into globalization in the Western sense of the word; playing catch up with curriculum reforms, using English as a first language for study and for business, seeing the new generation Z emulating Western values and leaving traditional family values and their sense of national identity behind as technology takes them into the global zone with westernization masquerading as globalization.

However, we can see that the solution for middle-income countries to prepare to become nations that are capable of competing in the global marketplace, as opposed to merely becoming groupies to high-income countries, is not to refute the capability to communicate internationally by taking English out of the curriculum (as discussed in my earlier article), nor is it to spurn foreign investment and foreign expertise being shared in the workplace, as the Indonesian government currently does. The solution may be to promote the use of appropriate, nationally and internationally relevant content through available technology to students in the classroom to counteract their exposure to westernization (aka globalization) via social media and MTV, with all the implications of the ‘necessities’ and values of global life; paler than pale Asian celebrities promoting skin lightening creams, or Islamic music artists in miniskirts.

Finding a way to globalize the classroom using both the sense of national identity and global citizenship skills, such as English language, to name just one, is necessary for the aim of any middle-income country’s education system. This is because these countries, be it in Southeast Asia or the Maghreb region, should seek to create citizens capable of competing in a global workplace, without falling into the trap of westernization, where middle-income countries will always be (kept) one step behind their western counterparts with globalization remaining on these western terms.