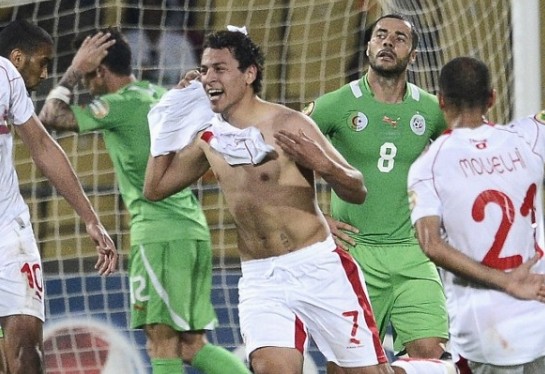 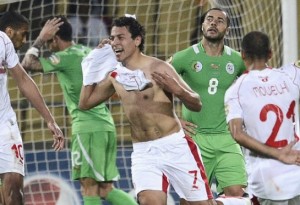 The North African derby was settled by a late goal from Tunisia’s wonder boy, Youssef M’Sakni. Algeria proved to be the better side during the game but was unable to make their opportunities count as they continued to dominate possession.
Tunisia was forced to make an early substitution after 16 minutes when Issam Jemaa was replaced by Hamdi Harbaoui after a tussle with Essaid Belkalem for the ball. Algeria almost scored when Islam Silmani header went on to hit the woodwork. His header was later followed on by Algerian threats to the Tunisian goalmouth with chances that they fail to utilize.
Tunisia had their first real chance just before half-time, when Hamdi Harbaoui showed his pace before unleashing a shot which went straight into the safe hands of Rais Mbolhi.
After the break, both teams pumped up their game and evidently, the second half was fractionally better than the first, with Djamel Mesbah flashing a 25-yard shot just wide on 56 minutes and team-mate Adlene Guedioura firing just over the bar from similar range half an hour into the second half before seeing going just over the goalkeeper’s head, but flew inches over the bar.
Tunisia could have taken the lead few minutes later but Hamdi Harbaoui shot was out of target at point blank range from the goal post after a neat pass from Oussama Darragi.
The game was already heading for a draw in another dull affair when M’Skani curled home an unstoppable 25-yard effort into the top corner to put Tunisia ahead. It was a far better goal than the game deserved, but Tunisia will not be complaining after joining Ivory Coast at the top of the group following the latter’s 2-1 win over Togo earlier on in the day.

North Africa Post's news desk is composed of journalists and editors, who are constantly working to provide new and accurate stories to NAP readers.
NEWER POSTEgypt: the country has a large consumer base
OLDER POSTAlgeria: oil and gas investments under uncertainty