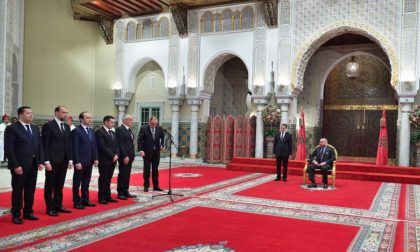 The new ministers are Abdelahad Fassi Fihri of the leftist PPS party who was appointed minister of National Planning, Urban Planning, Housing and Urban Policy succeeding to the head of his party Nabil Ben Abdellah.

The other government coalition member, the Popular Movement (MP), replaced his sacked members with Saïd Amzazi as minister of National Education, Vocational Training, Higher Education and Scientific Research and Mohamed El Gharas as State Secretary in charge of vocational training.

The government reshuffle also introduces a new portfolio, that of a minister delegate to the foreign minister in charge of African cooperation. The Position was assigned to Mohcine Jazouli.

The newly appointed cabinet members attended the oath taking ceremony before King Mohammed VI, who, by virtue of Article 47 of the constitution, appoints ministers upon proposals from the head of the government.

Last October, King Mohammed VI sacked four ministers of the current cabinet for falling short of achieving social and development goals and held other senior officials and former ministers responsible for the delay witnessed in the implementation of a set of state-funded projects.