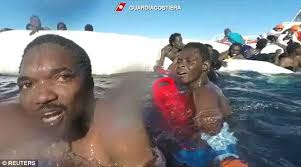 Migrants Continue to Lose their Lives off Libya’s Coast

Migrants and particularly Sub-Saharans continue to risk everything for a better life in Europe. The number of those who lost their lives in the Mediterranean is rising dramatically.

This weekend, at least eight people died and 86 others were rescued after their small inflatable boat sank off the coast of Libya, according to the Italian coast guard.

The coast guard, which coordinates rescues in international waters off Libya’s coast, said an aircraft on patrol for a European anti-smuggling operation spotted the dinghy in difficulty.

All eight victims were female. Survivors told rescuers roughly 150 migrants were on board when the dinghy was launched from Libya’s coast. Proactiva Open Arms, a Spanish humanitarian group, one of the few NGOs that still operate their own rescue ships outside Libyan waters, said some of the migrants had spent hours in the water before being saved.

The aid group tweeted that possibly dozens more could be missing from the boat. A spokesperson for the Libyan navy and coast guard said the migrants’ boat capsized and sank in international waters and the Libyan navy did not have the resources to deal with the issue.

In 2017, about 119,000 migrants arrived in Italy from across the Mediterranean and, according to the International Organization for Migration, more than 3,100 died making the crossing.

Libya is a hotbed for human traffickers, whose networks thrived due to the chaos prevailing in the North African country since the fall of the regime of former ruler Muammar Gaddafi in 2011.

The Islamic State has taken advantage of the situation to conquer vast swaths of land in the country, mostly in coastal regions where many criminal gangs indulge in illegal migrant trafficking.

According to Amnesty International, hundreds of thousands of refugees and migrants trapped in Libya are at the mercy of Libyan authorities, militias, armed groups and smugglers often working seamlessly together for financial gain.
Tens of thousands are held in overcrowded detention centers, suffering abuse, ill-treatment and even slavery.