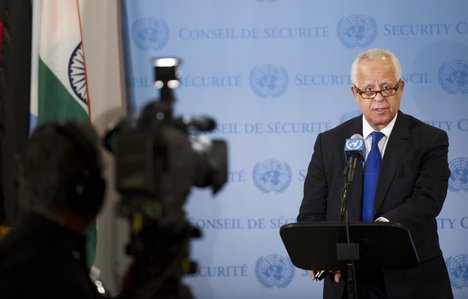 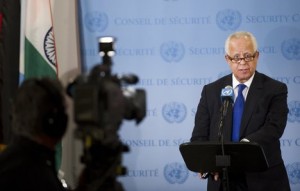 Morocco has been elected last week, in the person of its Permanent Representative to the United Nations, Mohamed Loulichki, chair of the Security Council’s Counter-Terrorism Committee.
Morocco, which is non-permanent member of the Security Council since January 2012, will chair the committee for the period ending December 31, 2013.
The Counter-Terrorism Committee (CTC), set up in the wake of the 9/11 terrorist attacks in the United States, works to bolster the ability of United Nations Member States to prevent terrorist acts both within their borders and across regions.
The committee helps Member States to enhance their legal and institutional ability to counter terrorist activities through technical assistance, monitors progress scored, and drafts country reports to provide a comprehensive snapshot of the counter-terrorism situation in each country. It also serves as a tool for dialogue between the Committee and Member States, and encourages countries to apply known best practices, codes and standards, taking into account their own circumstances and needs.
Morocco will also chair a Working Group set up in accordance with Security Council resolution 1566 adopted in 2004. the Working Group is tasked to examine practical measures to be imposed upon individuals, groups or entities involved in or associated with terrorist activities, other than those designated by the Al-Qaida/Taliban Sanctions Committee. The working group was also entrusted with examining the establishment of an international fund to compensate victims of terrorist acts and their families.
The Security Council will give special focus to terrorism and UN peacekeeping during January 2013.
The announcement was made by Pakistan’s Permanent representative to the UN whose country is holding the rotating presidency of the Council for this month.
He told a news conference that his delegation will convene on January 15 a ministerial-level open debate on a comprehensive approach to counter terrorism.
“This will give an opportunity to Council members and the general membership to have a holistic view of the continuing threats and challenges posed by international terrorism, and the best ways of formulating and implementing a coherent and comprehensive response to this menace,” he stated.
The meeting will be chaired by Pakistani Foreign Minister Hina Rabbani Khar.
The Pakistani delegation has also planned an open debate on UN peacekeeping for January 21. The debate is expected to result in the adoption of a draft resolution on the issue, the Pakistani diplomat said.
Likewise, the Moroccan diplomat Mohamed loulichki will chair the Security Council Committee on Guinea-Bissau that was established last May to oversee the relevant sanctions measures to be decreed on individuals and entities and to undertake the tasks set out by the Security Council resolution 2048.
During the current year, Morocco will, on the other hand, sit as vice-chair of the Security Council Committee on the Democratic Republic of the Congo that was established in 2004. The committee is chaired during 2013 by Azerbaijan and has Pakistan as another vice-Chair besides Morocco.
The committee supervises the arms embargo imposed on all foreign and Congolese non-governmental entities and individuals operating in eastern DRC and oversees the relevant sanctions measures to be imposed on these individuals or entities.
Both Committees publish annual reports of their activities and brief the Security Council on a regular basis.
Mohammed Loulichki, born in 1952 in Fes, has been Morocco’s Permanent Representative to the United Nations in New York since November 2008. He had earlier served as Deputy Permanent Representative at his country’s Mission in New York from July 2001 to 2003.  Prior to that, beginning in 1999, he was Morocco’s Coordinator with the United Nations Mission for the Referendum in Western Sahara (MINURSO).
Loulichki had also been Morocco’s Permanent Representative to the United Nations Office in Geneva and ambassador to Bosnia and Herzegovina, Croatia, and Hungary.