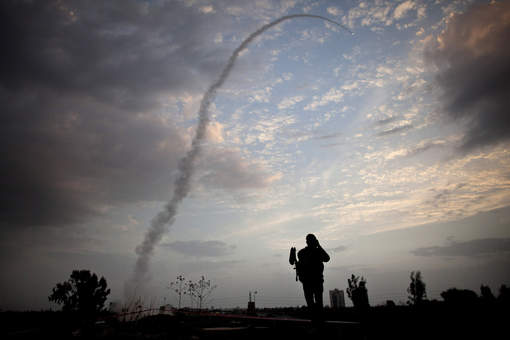 Egyptian security forces have captured lately six U.S. made anti-tank and surface-to-air missiles that were on their way to be smuggled into the occupied Palestinian Gaza Strip.
The weapons, which were intercepted in the Sinai desert, are believed to have come from Libya and to have been manufactured by U.S. firms. But some experts cast some doubts on the origin of the seized weapons, saying Washington bans the sale and transfer of weapons to Libya.
U.S. intelligence agencies estimate that the Gadhafi regime had as many as 20,000 surface-to-air missiles. While thousands of the missiles are believed to have been destroyed in this year’s NATO bombing raids, many were looted in the chaos of the Libyan war and sold to neighboring jihadists.
Following the collapse of Gadhafi regime, some foreign press reports have stated that weapons were transferred from Libya to the Palestinian besieged coastal enclave through the Sinai desert, though none have been documented as U.S.-made. Libya used to purchase its weaponry mainly from Russia. Some European and Asian countries were also Gadhafi arms suppliers.
According to military experts, the missiles seized by Egypt have a range of up to one mile and were buried in a hole outside the city of el-Arish in the Sinai desert, which has been a main passageway for weapons smuggling into Gaza. Sinai, which has borders Israel and the Gaza Strip, has suffered from a vacuum since the uprising that ousted President Hosni Mubarak in February 2011. Through a complex system of underground tunnels, Hamas, the militant Palestinian faction that rules the isolated Gaza strip and other armed groups have been able to smuggle Iranian-made long and medium-range rockets as well as explosive materials
In the few past years, several weapons smuggling operations were foiled by the Egyptian authorities in tunnels connecting Egypt and the Hamas-controlled Gaza Strip. Israel has imposed a blockade on the Gaza strip since 2007 which includes weapons as well as many basic goods such as food stuffs, medical supplies and stationery.
It seems that Egypt, which has been under mounting pressure to act against weapons smuggling to Gaza, is honoring its regional and international commitments. The ball is now in the other partners court !